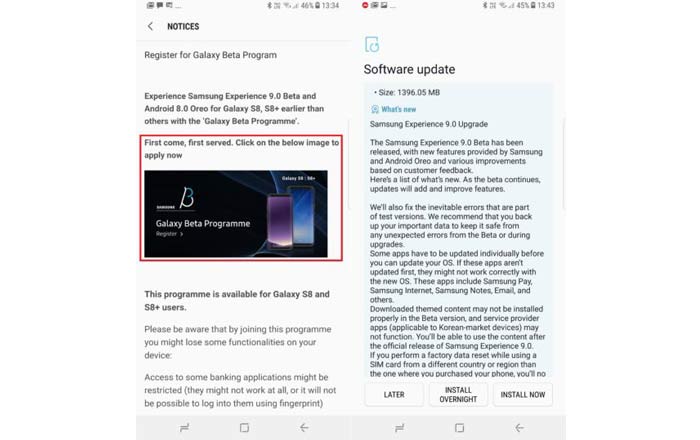 Samsung’s Android 8.0 Oreo beta program got launched in November 2017 for a few select countries such as the US and UK. It seems the initiative has now entered its second phase as Galaxy S8 and Galaxy S8+ owners in India can now sign up for it.

Samsung has not actually mentioned anything about a second phase officially, but the brand did promise that the Galaxy Beta Program for Oreo would eventually make its way to other markets. Poland, India, Spain, China, Germany, and France were expected to be part of this secondary push, but there haven’t been reports of the option arriving in nations other than India.

It’s only a matter of time though. Users will have to head to the Samsung Members app in their Galaxy S8 or S8+ to get started. They’ll see a ‘Register for Galaxy Beta Program’ option within the Notices section located in the Home tab. As the listing notes, participation is on a first come, first served basis.

Samsung has previously allowed more people to join its beta process after the first round of registrations is over and done with. It’s not clear if this will happen in India, so it’s best to be quick about it. Once registered, owners can download the beta by choosing the ‘Download updates manually’ choice inside the Software update menu in Settings.

The Oreo build weighs in at 1396.05MB and might not be available immediately. It should arrive eventually though, as Samsung says the update will be expanded gradually.