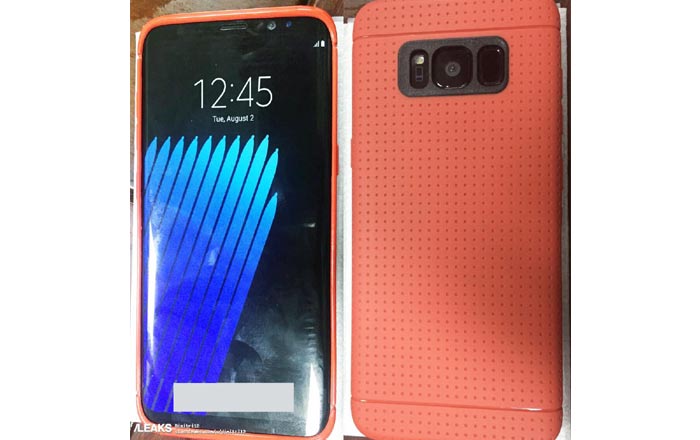 A flood of Galaxy S8 leaks have emerged online, offering a mix of specs, live images, and a teaser. The handset is still about a month away from coming out in the open.

Starting off with the hands-on snaps, the alleged Galaxy S8 can be seen protected inside a bright orange cover. It ticks off most of the handset’s assumed features such as its home button-less nearly bezel-free curved screen, rear-facing fingerprint reader, iris scanner, and heart rate monitor.

One thing that should give pause is the fact that the wallpaper seen on the Samsung device is the Galaxy Note 7’s. As such, there’s a chance the pictures are a photoshopped fake. As for specs, the upcoming flagship has gotten most of its features leaked via a detailed specifications sheet.

The Galaxy S8 Plus’ specs list notably came to light just a few days ago. The two have almost everything in common expect for the display. The Galaxy S8 apparently features a 5.8-inch panel when measured as a full rectangle and 5.6-inch when accounting for its rounded corners.

This is in contrast to the Galaxy S8 Plus which may sport a 6.2-inch and 6.1-inch screen, correspondingly. The only things which neither sheet confirms are the battery and processor. Rumor has it that the smaller variant will pack a 3250mAh powerhouse and the larger model a 3750mAh one.

Chipset duties will probably be taken up by a Snapdragon 835 and Exynos 8895 CPU, depending on the market. Finally, frequent leakster Evan Blass has posted a teaser for the Galaxy S8 which is likely supposed to come out after the phone has been announced.

The image showcases the outline of a smartphone with narrow bezels and the tagline ‘Unbox your phone.’ It also asks people to sign up if they want to know more about the Next Galaxy.