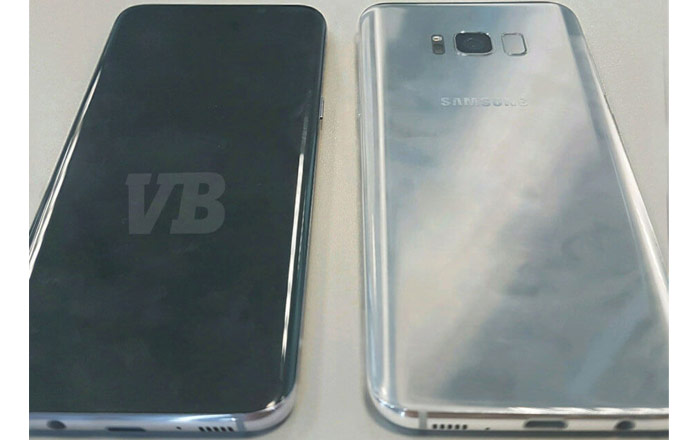 The Samsung Galaxy S8 was the subject of a huge leak recently, revealing a number of key details of the upcoming smartphone. It’s now out in the open yet again, courtesy an in-depth profile which includes images, specs, price tags, and dates.

The photo above mostly falls in line with previous snapshots of the Galaxy S8. While the bezels can’t be clearly made out in the picture, the physical home button is markedly not present. The fingerprint sensor has been moved to the back as a result, right next to the camera module.

Samsung is supposedly going to release 5.8-inch and 6.2-inch variants of the flagship. Both screens feature a dual-curved design, cover 83% of the panel, sport an unusual 18.5:9 ratio, and output a QHD Super AMOLED resolution. The brand is likely to stuff Snapdragon 835 processors and Exynos chipsets in different markets.

Photography-wise, the Galaxy S8 is allegedly getting a 12MP rear and 8MP selfie shooter. The former is rumored to have a brand new visual search ability that will trigger icons to appear on the screen which allow users to conduct different kinds of searches like a web search for text in an image or retail search for a product.

Samsung is probably going to bless the device with an iris scanner, USB Type-C support, 3.5mm headphone jack, a desktop dock called Samsung DeX, and an AI solution named Bixby which can reportedly handle more complex commands than others. A dedicated button on the side triggers the assistant.

Interestingly, VentureBeat asserts that the Galaxy S8 will boast of a 3D Touch-like pressure-sensitive technology. The lower half of the phone’s display is apparently able to distinguish between different types of presses.

All these upgrades appear to have increased the charge of the Galaxy S8 by €100, translating to a €799 cost for the 5.8-inch variant and €899 cost for the 6.2-inch one. Samsung’s seemingly going to launch the handsets at an event in New York City on March 29 and put it up for sale on April 21.