Yet another live image of the Samsung Galaxy S8 has surfaced online, this time set apart by virtue of the fact that the handset pictured is switched on. It appears to be running Weibo, coincidentally the source of the photo.

As with any leak, there’s no way to authenticate whether or not the photo is the real deal. It certainly matches what we’ve seen of the Galaxy S8 so far. The screen is of the dual curved variety, sloping on both edges with the barest hint of bezel. The home button is prominently absent thanks to the display commanding the maximum amount of area.

The bottom of the smartphone makes room for speaker grilles, a USB Type-C port, and a 3.5mm headphone jack. Not much else can be gleaned from the snapshot. Another recent leak showcases what are claimed to be the official Samsung cases for the device.

Also See: Samsung Pay coming to India in first half of 2017

The two covers seen in the photo below could help further verify the theory that the Galaxy S8 will be sold in 5.7-inch and 6.2-inch options. Both feature cutouts for the camera, LED flash unit, and rumored fingerprint sensor. The left side has dedicated a large amount of space for the volume and power buttons, while the right has an assumed Bixby button. 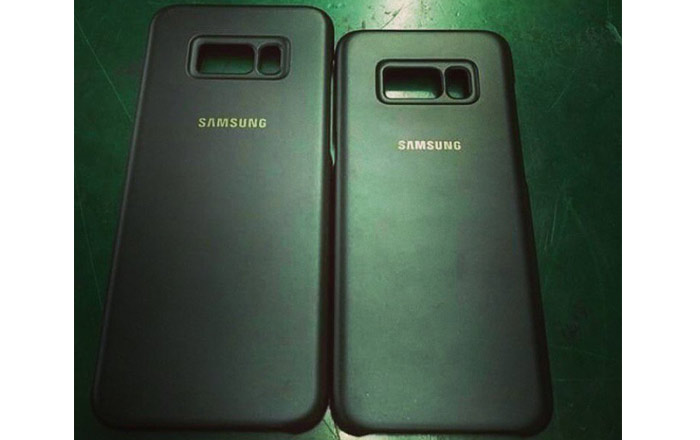 Bixby has become the subject of separate speculation which alleges that the AI assistant will support 7 to 8 languages. As per SamMobile, these languages will include English, Chinese and Korean. Samsung is apparently hoping that it’ll drive sales of the Galaxy S8 and plans to expand it to other products in the future.

Google’s own AI Assistant supports 5 languages namely German, Portuguese, Brazilian, English and Hindi. Siri’s ahead of the curve here thanks to support for 20. We’ll have to wait and see how Samsung’s Bixby performs compared to both.