Samsung Galaxy S8 gets spotted in the wild

A slew of Samsung Galaxy S8 images have come out in the open, offering a hands-on look at the upcoming flagship. Different sources uploaded live photos of the handset online, mostly falling in line with past rumors.

Chinese tipster Ice universe took to his Twitter account to showcase snaps of the Galaxy S8 leaked by a case maker. Based on the pictures, the device is set to boast of a nearly borderless screen with rounded corners and slim bezels at the top and bottom. It might have a dual-curved display sloping on both edges, extending the look to both standard and Plus variants of the smartphone.

An array of sensors can be seen along the top half. Speculation till date has hinted that the Samsung phone will feature an iris scanner alongside a fingerprint sensor. The latter is rumored to have shifted to the back of the handset next to the camera module.

The bottom half of the alleged Galaxy S8 features a USB Type-C port, 3.5mm headphone jack, and speakers. One picture offers a glimpse at what the device’s Grace UX looks like. The interface notably made its debut with the ill-fated Galaxy Note 7. 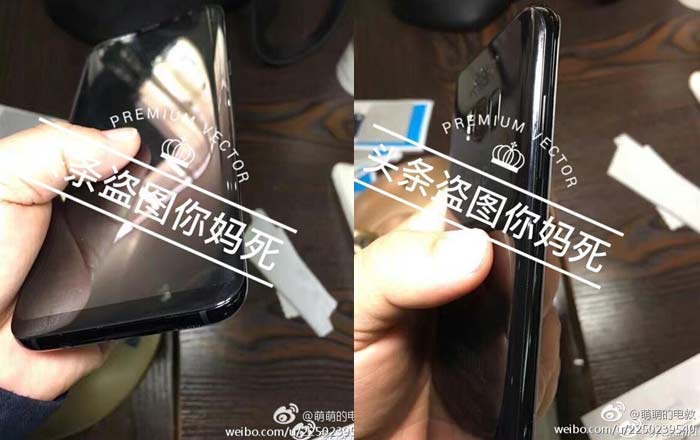 As for the other leak, mmddj_China appears to have gotten his hands on a glossy black Galaxy S8 Plus. If authentic, the photos can be seen as proof that the brand plans to place the fingerprint sensor on the rear. The larger iteration reportedly has a 6.2-inch screen, larger than the 5.7-inch or 5.8-inch panel of the regular variant.