Samsung’s flagship Galaxy S8 and Galaxy S8 Plus have so far been leaked in the form of renders and hands-on images, along with an extensive list of features. Now an eyewitness account is here to reaffirm the unique design of the phones.

CNET Korea has published a series of Galaxy S8 and Galaxy S8 Plus images that are based upon this so-called eyewitness report. The source has also revealed a number of measurements to further verify rumors that the handsets will showcase bigger screens within approximately the same body present on the Galaxy S7 and S7 Edge.

The renders don’t feature a home button, in keeping with previous speculation that the front panel would be mostly screen. This elimination has resulted in the fingerprint scanner moving to the back of the Samsung handsets. Pocketnow suggests that the sensor will double as a physical home key. 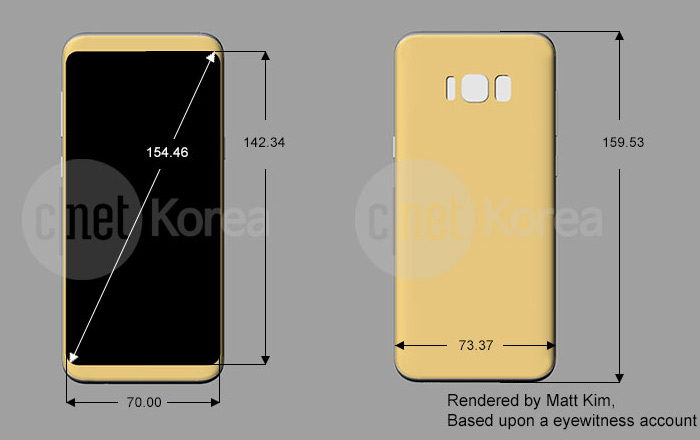 Based on the photos, it seems the Galaxy S8 and Galaxy S8 Plus are getting a dedicated side button to trigger Bixby. A 3.5mm headphone jack can be seen at the bottom alongside a USB Type-C port. The two are probably going to get an official announcement on March 29 followed by an April 21 release.