The Galaxy S8 was recently leaked in the form of detailed 3D renders showing off the phone from every angle. Now the case maker behind those images has released the exact size details of the phone.

Even without the measurements, it’s clear based on the photos above and below that Samsung is going for a very different design language to differentiate the Galaxy S8 from the Galaxy S7. Firstly, both variants of the former appear to have a distinctively curved look, leading credence to talk that the brand is going to ditch the flat screen version this time round.

The Galaxy S8 is supposedly going to measure 140.14 x 72.20 x 7.30mm, which makes it a bit shorter and slimmer than its predecessor. GSMArena says that it has a 5.7-inch display when not accounting for the curves on each side. This could mean that the smartphone will maintain the same overall size as its previous variant while sporting a significantly bigger panel. 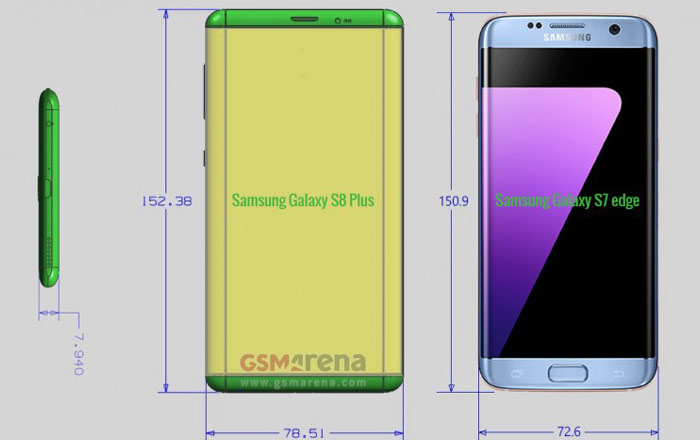 As for the Galaxy S8 Plus, it’s reportedly sized at 152.38 x 78.51 x 7.94mm, which is taller and wider than the Galaxy S7 Edge. The screen looks to be 6.3-inch when viewed head-on, but its actual dimensions might be a bit larger because of its sloping edges.

All-in-all, Samsung seems to have adopted a minimum bezel aesthetic for the handsets. It also appears to be sticking to a microUSB 2.0 port instead of a USB Type-C one, an unusual decision given the flagship status of the devices.