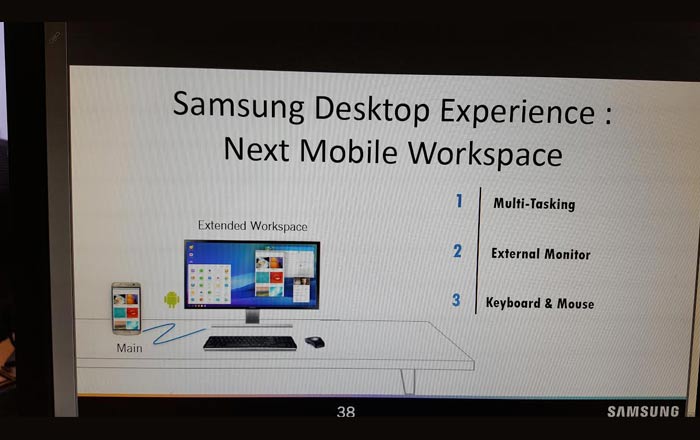 Samsung’s next Galaxy S8 might just go up against a signature Microsoft feature when it comes out later in the year. A freshly leaked image shows what appears to be a very Continuum-esque tool that allows the handset to act as a portable computer.

The source who supplied the photo claims it’s from an upcoming Galaxy S8 presentation. The slide in question is titled ‘Samsung Desktop Experience: Next Mobile Workspace’ and depicts a phone that’s connected to a monitor directly through a wire. This is where it gets interesting, since the latter appears to offer a full PC experience, just like Continuum.

Continuum basically allows anyone with certain Windows Phone models to conveniently plug their smartphone to a display and turn it into a full-fledged Windows 10 computer. It’s unclear how an Android-based TouchWiz implementation of such a workspace would function with the Galaxy S8.

All About Windows Phone thinks that Samsung has engineered its software to handle both single window phone and multi-window desktop use. If real, the company would be inviting comparisons with Microsoft. However, it has the distinct advantage of being more popular worldwide, so it’s take on Continuum might just prove to a hit.

Other than the monitor, a keyboard and mouse can also be spotted in the slide. The two are presumably connected to the Samsung offering via Bluetooth. There’s no way to tell whether the leak is authentic or not as of now. The graphics in the slide are clearly mockups that anyone can conjure up.