The Samsung Galaxy S8 has become the subject of yet another case maker leak, the third instance of this occurring in the past few days. There’s also some fresh information about the handset’s specs thanks to reports out of South Korea.

The anonymous case maker behind the latest crop of 3D renders claims the images are based on accurate schematics. If the photos are actually the real deal, it looks like Samsung is opting for a nearly bezel-less style. The phone’s curved edges are now much more distinct and occupy more space on the sides than before.

The display appears to be taking up additional real estate on the Galaxy S8 as well. One major casualty of this approach is the physical home button and associated fingerprint sensor. The former is apparently now present on screen and the latter underneath the glass.

The Samsung device may also sport stereo speakers based on the fact that there are speaker grills at the top and bottom of the handset. Other notable aspects include what looks to be a headphone jack and a USB Type-C or microUSB port. 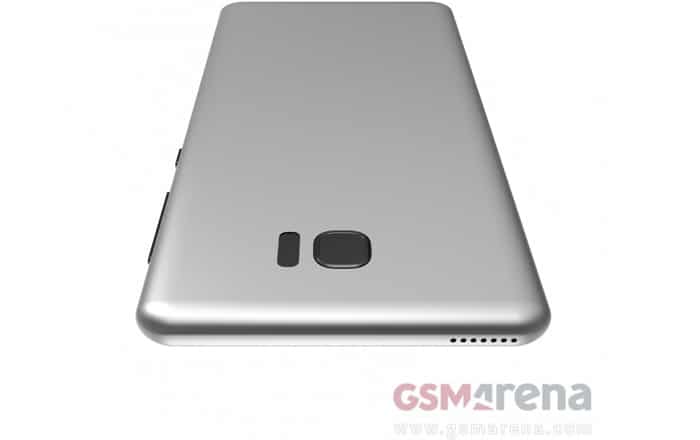 A separate set of reports recently alleged that the Galaxy S8 would be available in two different variants. One is supposedly going to measure 5.7-inch and feature a single camera on its back, while the other Plus version may feature a 6.2-inch screen and a dual-snapper setup.

It follows that the 3D renders are of the regular Galaxy S8 since only one camera can be seen on the rear. Samsung may just unveil the handset at the MWC. It’s rumored to be putting together a handful of units for launch which will be followed by a full-scale release in April.