Samsung Galaxy S7 buy one, get one free deals and more

Samsung may have not made huge changes to the Galaxy S7 series as compared to the S6. But its two new flagships are still unarguably among the best in the high-end smartphone market today. If potential buyers needed more convincing, the Samsung Galaxy S7 and S7 Edge are also being clubbed with some awesome offers.

T-Mobile is pairing the two devices in the series with a buy one, get one free (limited period) deal. So is carrier AT&T. From March 11, T-Mobile customers can plop down the money for installment plans on two S7 or S7 Edge units and take home the full amount on the second free handset in the form of a prepaid debit card.

Through March 18, T-Mobile will also be bundling the handsets with a Gear VR headset and a full year’s worth of Netflix at no extra charge. AT&T’s BOGO offer is a wee bit more complicated. New and old subscribers of the company’s Next installment plan can avail of the second Galaxy S7 or S7 Edge for free only if they’re willing to get another new line on a Next 24 plan spanning 30 months.

They must then sign up for a qualified scheme and cough up the sales tax for both Samsung phones. After around three bill cycles, AT&T will begin crediting the concerned customer’s account every month over 30 months, until the amount touches $695. Those who’ve already purchased two Galaxy S7 devices which meet said T&C, can expect AT&T to award them with credits too. 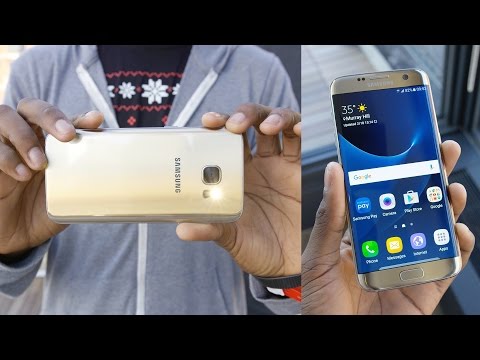 So their retail prices amount to $672 (same as US Cellular) and $792, respectively. For a limited period, Verizon is even extending a $100 bill credit to new and existing customers upon activation of the S7 or S7 Edge. Those who register their unit through this page before March 18 can get a Gear VR or Gear S2 smartwatch free. It’s an online-only deal.

On the other hand, Sprint is proffering 50 percent off on a second Galaxy unit. The operator will sell you an S7 at $25.99 for 2 years or an S7 Edge at $30.50 per month for 2 years. You don’t get 50 percent off right away, but will have to wait for it to be credited to your account within 3 invoices. In case you want to upgrade to another device, you’ll have to do so after 12 installments.

There’s also the Galaxy Forever Sprint Lease which allows you to upgrade to the latest flagships introduced by Samsung, on a yearly basis. So technically, you’ll just be ‘renting’ it for 12 months before moving on to the next smartphone. Great for those who hate commitment, not great for those who want to actually own the device at the end of their plan cycle.

The 32GB Samsung Galaxy S7 Edge and its flat-screened sibling are up for pre-order in India now and both will be available in all three color options of gold, silver and black. They are priced at Rs 48900 and Rs 56900, correspondingly. The release date is set for March 18 and those who pre-book it by March 17, will receive the Gear VR headset too at no additional cost.

The company’s online store as well as Flipkart are accepting orders for the Samsung Galaxy S7 and S7 Edge currently. Vodafone RED subscribers can take advantage of a double voice and data scheme for 6 months when they buy either flagship device.