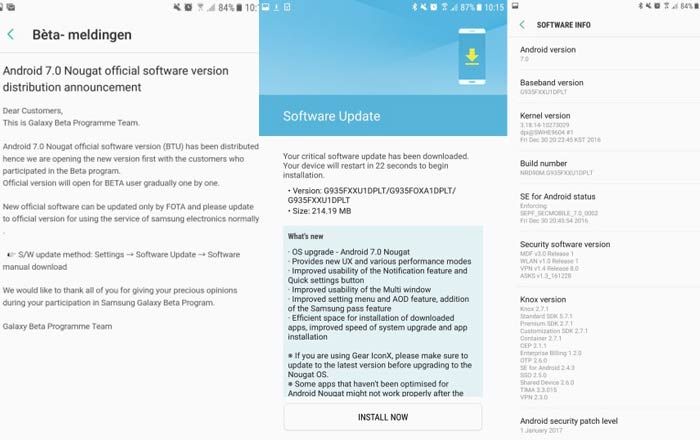 Samsung’s officially started rolling out Android 7.0 Nougat to owners of the Galaxy S7 and Galaxy S7 Edge. The brand had initially launched a Beta Program for users that allowed them early access to the update.

As it turns out, it’s these beta testers who have begun getting the official Nougat upgrade for the Galaxy S7 and Galaxy S7 Edge first. The promotion weighs in at roughly 215MB and is likely going to be rolled out slowly. Regular users who didn’t participate in the program will probably get it as well.

A previous report had alleged that Samsung was planning to out Nougat on January 17. This may still happen for non-beta owners of the phones. The brand itself hasn’t said anything official about the rollout and its timeline.

Also Read: Samsung’s foldable phones to come out in Q3 2017

In news that may come as a disappointment to some, the Nougat update being rolled out right now bears the version number 7.0 rather than 7.1.1 as was expected. It brings with it a number of significant changes.

For instance, the Galaxy S7 and Galaxy S7 Edge will receive a new UX and performance modes and better usability of the multi window facility. It also adds improved notifications, an enhanced quick settings button, and the Samsung pass feature.

The promotion also promises to deliver changes like ensuring there is efficient space for installation of downloaded apps, as well as faster system upgrades and application installations. Samsung is notably warning Gear IconX owners to update to the latest version before upgrading to Nougat.