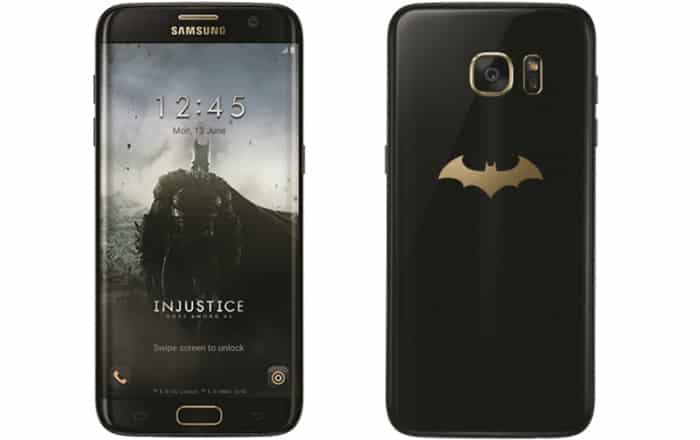 Fans of Batman who’ve always wanted a smartphone tailored just for them are in luck today, since Samsung has decided to launch a special edition of the Galaxy S7 Edge to celebrate the caped crusader. Specifically, it’s meant to commemorate the third anniversary of the game Injustice: Gods Among Us.

Which is why it should come as no surprise that Samsung is officially calling the handset the Galaxy S7 Edge Injustice Edition. For anyone who thinks releasing a phone just to celebrate a comic book character is a bit excessive, remember that this is the same company which had released a striking Iron Man-inspired red and gold version of the Galaxy S6 Edge last year.

The real disappointment lies in the fact that Samsung didn’t release the phone back when Batman v Superman was in theaters. It missed a golden opportunity to release a Superman version of the smartphone in all its red and blue glory to really fan the flames of fandom rivalry. There’s still time for that later though, given the endless deluge of comic book movies in our future.

Getting back to the new injustice-filled Galaxy S7 Edge, the device is being sold in a decked-out box filled to the brim with Batman memorabilia. There’s an actual gold-plated Batarang for all your throwing needs, a toughened-up rubber case inspired by Batman’s armor, and a free Gear VR headset.

The Samsung device itself features a golden Batman logo on the back, in addition to a gold-lined home button and camera. The brand is also shipping it with Batman screensavers to complete the sleek look. There’s even a special Batman-themed dialpad for when you need to call Alfred for help.

A quick look at the specifications of the Samsung Galaxy S7 Edge Injustice Edition:

Samsung hasn’t announced any price details for the Galaxy S7 Edge Injustice Edition yet. It plans to roll out the handset in China, Singapore, Korea, Latin America and Russia by early June, with other regions to follow. So keep a lookout for a bat signal in the sky, since it’ll probably be the company telling you your Batman phone is ready.