We’ve been hearing about the upcoming Samsung Galaxy S6 smartphone a lot these days, which is an indication that a launch is right around the corner. This successor to the S5 has now been spotted on the AnTuTu benchmark website, which has revealed a number of its key specs.

A Chinese portal named CNMO (via Phone Arena) has spotted this benchmark result online, and has posted a screenshot of it. The handset in question bears the model number SM-G925F, and is expected to be one of the two variants of the Samsung Galaxy S6 that will be launched by the South Korean company. 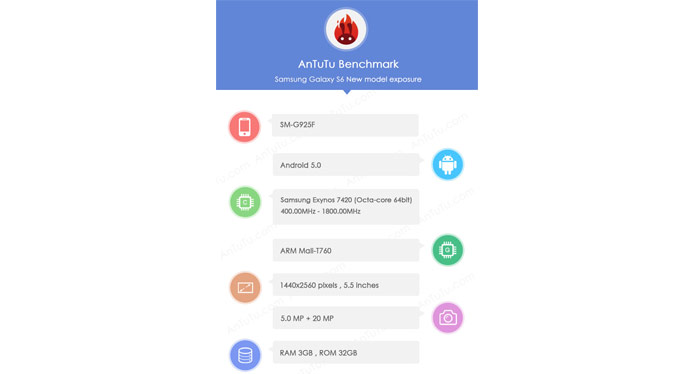 While one among them will feature the Snapdragon 810 chipset inside it, the device that has leaked houses a 64-bit octa core Exynos 7420 SoC. This setup is accompanied by an ARM Mali-T760 GPU and 3GB worth of RAM. The new Samsung flagship will bear a 5.5-inch panel which will display its visuals in QHD resolution.

Also Read: Samsung Galaxy S6 to be being developed from scratch under Project Zero codename

A 20MP camera is expected to form part of its offerings, apart from a 5MP unit which will be seen sitting on its front surface. Obviously, Android 5.0 Lollipop will be its preferred OS, while another bit that has been revealed by the benchmark result is that the device will carry 32GB of storage onboard.

Here’s a quick glance at the leaked specs of the Samsung Galaxy S6:

The Samsung Galaxy S6 is apparently being developed with a completely new external appearance to bring some newness into the range of the company’s Android smartphones. Recently, we heard a rumor that just like the Note 4, this flagship will also have an Edge version with a curved display.