The Samsung Galaxy S5 Zoom is finding it very difficult to keep its details away from the prying eyes. Its specifications have already been circulating on the internet after it was benchmarked at GFXBench and only yesterday we came across a purported picture of the phone. And now, we have some more details on the phone’s features and components along with the AnTuTu results.

It is the guys over at SamMobile who have discovered this information from unknown sources and they reveal that the Samsung Galaxy S5 Zoom scores 33252 points on AnTuTu. Thus the device comes across as being better than the Galaxy S4 as well as the HTC One, provided the South Korean company has not tweaked the results. 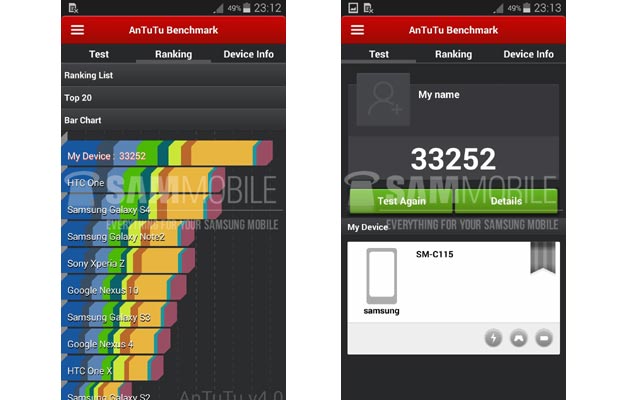 And as far as the specifications of the phone are concerned, it is likely to flaunt a 4.8-inch Super AMOLED HD touchscreen of 1280 x 720p resolution. Along with a 2.1MP webcam, the device will tag along a 20.2MP camera and you can even look forward to features like Xenon flash, Optical Image Stabilization and 10x optical zoom amongst other things.

Moreover, it is powered by a 6-core Samsung Exynos 5 Hexa processor based on the ARM architecture which employs two 1.7GHz Cortex A-15 cores and four 1.3GHz Cortex A7 cores. The SoC will be accompanied by a quad core ARM Mali-T624 GPU as well as 2GB of RAM. An expansion slot should be present and the smartphone will make the most of the Android KitKat 4.4.2 OS. All common connectivity features are also likely to be loaded in it. 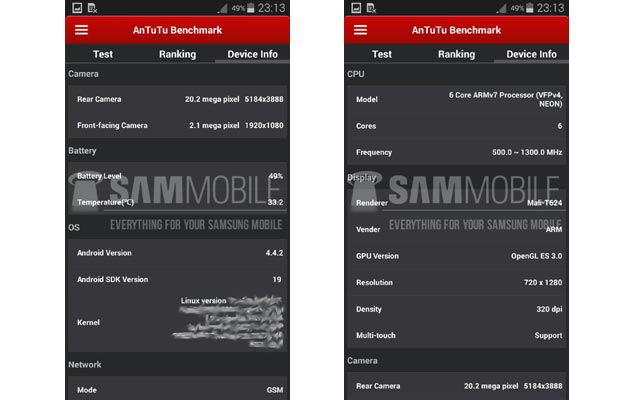 The Samsung Galaxy S5 Zoom’s availability details are under wraps for now, but we will let you know about them as soon as they are out.