We’ve started seeing rumors about Samsung’s Galaxy S5 not long after the current flagship went official and with around two weeks left for the smartphone to go official, someof the information we know could end up being wrong. Everyone’s anticipating a 2K display and a 64-bit processor on the S5, but are these components actually required?

1080p screens on a 5-inch form factor are a bit of an overkill, so just imaging have a 2K panel in the same design. Handsets that have been confirmed to carry such high resolution displays include the Vivo Xplay 3S, the Oppo Find 7 and the Meizu MX4G. They all fall in the phablet category with screen sizes of at least 5.5 inches. 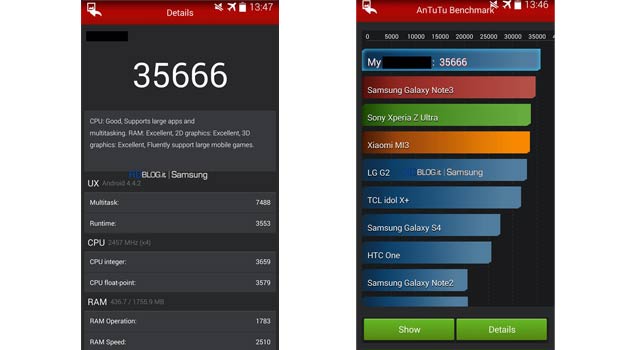 QHD panels in larger designs make more sense than a smartphone like the Samsung Galaxy S5 that’s rumored to arrive with a 5.2-inch AMOLED screen. Now, we come to the processor. Qualcomm and Nvidia have already announced their own 64-bit processors, the Snapdragon 410 and the Tegra K1, but none of them will arrive before H2 of 2014. So, how is it that Samsung has already got its silicon ready for the market? And most importantly, is Android ready for 64-bit?

The guys over at HDBlog.it have managed to get their hands on screenshots of the Samsung Galaxy S5 in AnTuTu. The specs listed here are slightly different from what we’ve been hearing in rumors. Firstly, there’s no mention of a 2K display, but a 1080p one instead with a pixel density of 480ppi. While everyone’s expecting the Snapdragon 805 and a 64-bit Exynos 6 SOC to be present, we might just see a faster version of the Snapdragon 800 and a 32-bit Exynos 6 instead. 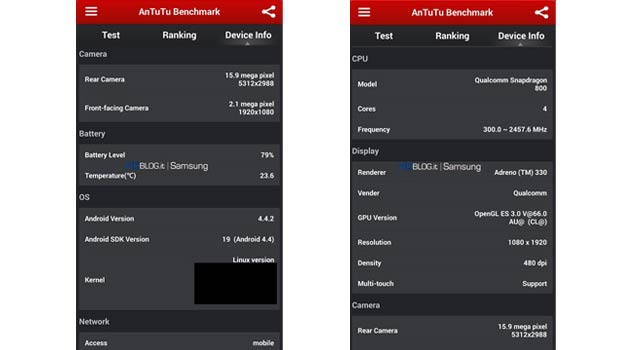 The model spotted on the benchmark has a Snapdragon 800 AP clocked at 2.5GHz with Adreno 330 graphics. And while the RAM is shown as 2GB, we still anticipate seeing 3GB of system memory. The company is also looking to implement a 16MP camera and a fingerprint reader, both of which are feasible components.

More screenshots of the Samsung Galaxy S5 on AnTuTu can be found at HDBlog.it.