The Samsung Galaxy S5 is going to be the talk of the year and we’re getting in on the conversation through this in-depth review. The S4 didn’t do as well as expected and that’s mainly why the company decided to launch its new flagship early. Also, the conglomerate now says that its latest device is more focused on what the user needs and less priority is given to the overwhelming amount of software. This is in no way a bad thing. In fact, it’s one of the most desired changes and Samsung has finally delivered, or so it says. But don’t worry, we’ve got to the bottom of things and put the latest flagship through its paces. So if you want to know what’s hot and what’s not about the SGS5, keep reading.

If you’ve seen the Galaxy S4, then you know exactly what the Samsung Galaxy S5 looks like. From afar, there are no noticeable differences between this year’s and last year’s flagship. The new model, however, is slightly larger and has a few tweaks which set it apart from its predecessor. First and foremost, the device weighs a bit more and it’s bulkier as well. That’s a thickness of 8.1mm and a 145g weight compared to the S4’s 7.9mm slim profile and 130g weight. The difference is noticeable, but barely. 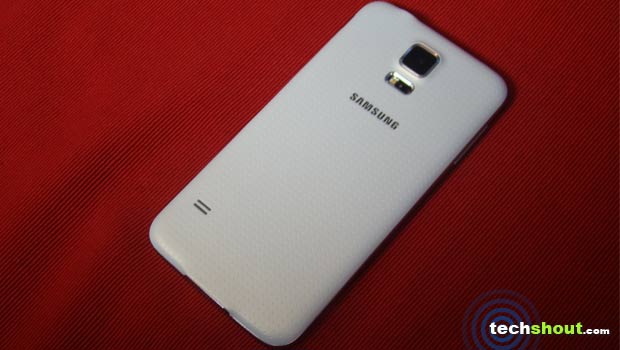 Moving over to the rear panel, you’ll notice that the textured pattern makes it appear quite different from the Galaxy S4′ back. While we were initially expecting to see a stitched faux-leather design, Samsung has delivered a finish that, well, resembles a band-aid (public opinion for a reason), especially if you get the gold color option. While we like the look and feel of it, the soft-to-touch foam-like plastic surface makes the phone a bit slippery. And if you’ve got sweaty hands, you’re in for a bit of a sticky experience.

Resting below the primary camera is an LED flash and a heart rate monitor which is a welcome addition to the phone’s feature set. The biggest improvement in the design is the IP67-certified form factor which makes the smartphone dust-resistant and waterproof at up to 1 meter for a period of 30 minutes. The company has managed to do this while leaving its traditional removable back panel design intact. This is made possible by adding a rubber strip on the panel’s flip-side to prevent any liquid from entering the main circuit board and coming in contact with the battery and SIM as well as microSD card slots. 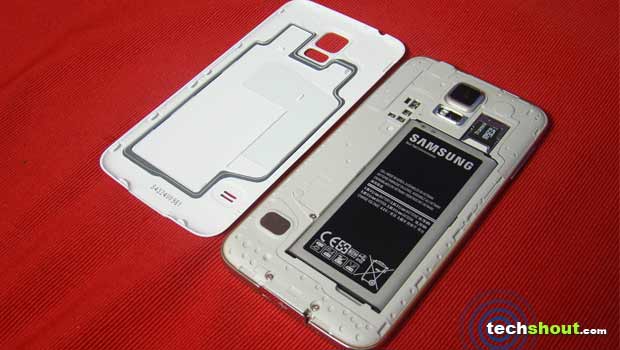 The 3.5mm audio jack which is on the top edge has also been made water-resistant and is left open. There’s even an IR transmitter, while the charging port on the bottom has been secured with a flimsy-looking plastic flap that uses a similar method as Sony’s flagship phones to keep liquids out. Lastly, Samsung has retained the same physical home key approach, but has incorporated a fingerprint reader into the button.

Compared to last year’s flagship, the Samsung Galaxy S5 comes with a larger screen, but the resolution is still the same, 1080p FHD. If you’re under the impression that Samsung hasn’t improved the display at all, then you’re in for a surprise. The panel is the same Super AMOLED one seen in the previous model, but it has been tweaked quite a bit. OLED screens usually deliver more vivid visuals due to higher levels of saturation. But on the S5, you get five different modes to adjust the output to your preference. 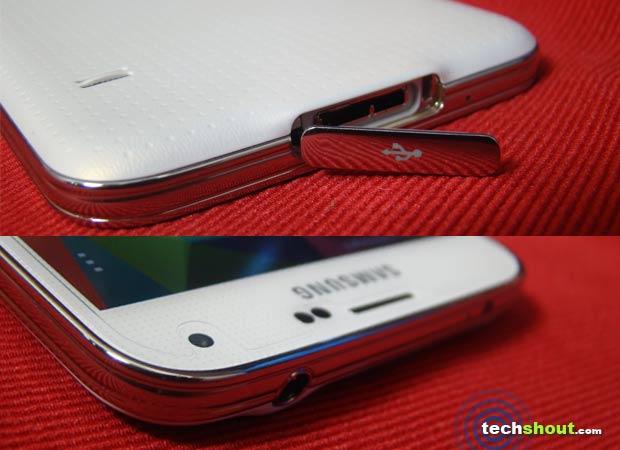 From Adapt, Dynamic, Standard, Professional photo and Cinema, the last two options provide more accurate calibration with realistic colors just like a traditional LCD panel. Additionally, Samsung has managed to deliver 500nits of maximum brightness which makes the display clearly visible under the bright sun. For dimly-lit or dark conditions, the brightness can be reduced all the way down to just 2nits to eliminate any eye strain. The bottom line here is that visuals are superb. FHD videos and also 4K footage captured from the device itself, are just a feast for the eyes and we couldn’t ask for more in the viewing angles department.

Many major smartphone makers are putting a lot of focus on imaging. We’ve seen devices come with ridiculously high megapixels and other innovations in order to deliver a better experience. Samsung is one of them. The Galaxy S5 doesn’t have any normal sensor onboard, but a 16MP ISOCELL lens developed by the company itself. On paper, the new imager is capable of high color fidelity and light sensitivity in poor lighting conditions. Sounds good, doesn’t it? Let’s check out our results.

In bright areas, the 16MP sensor does a fine job. Everything looks great resulting in sharp and clear images. The auto-focus is pretty snappy as well, but struggles in low-light conditions, especially for macro shots. Speaking of which, the camera can take some pretty good low-light shots with reduced noise. There’s just one problem though – Too much post-processing. What’s remarkable here is the zero shutter lag. This combined with the fast AF, not to mention quick startup of the camera app, allow you to whip out the device and snap up stills in a jiffy. 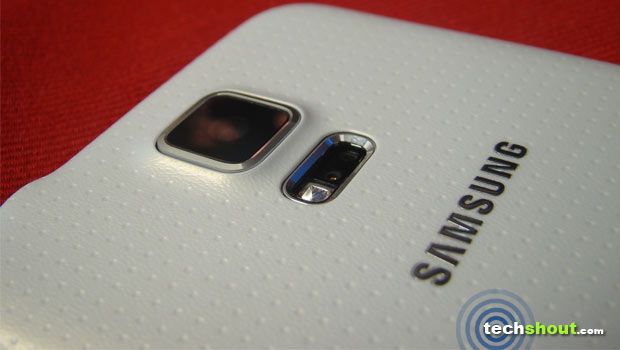 Coming to 4K video, the footage we recorded turned out great with stereo-quality audio. Samsung has thrown in a lot of features and modes. And they are scattered around, making it pretty confusing to find stuff. Apart from the usual options such as Face Detection, Effects, HDR, Dual Camera and more, you get new tools like Selective Focus which allows you to change the focus area after the image has been captured, and Audio Zooming that amplifies sounds from a specific area, amongst others.

As you probably know, Samsung’s flagships arrive in two main variants, one for the LTE market with a Qualcomm SOC and the other for the international market with its own Exynos chipset. We’ve got the latter version for review. The silicon implemented here comes in an octa core configuration (4 Cortex A15s and 4 Cortex A7s). And unlike the previous versions, it supports HMP (heterogeneous multi processing) which allows all 8 cores to run simultaneously. The new chipset also tags along higher clock speeds and improved graphics. 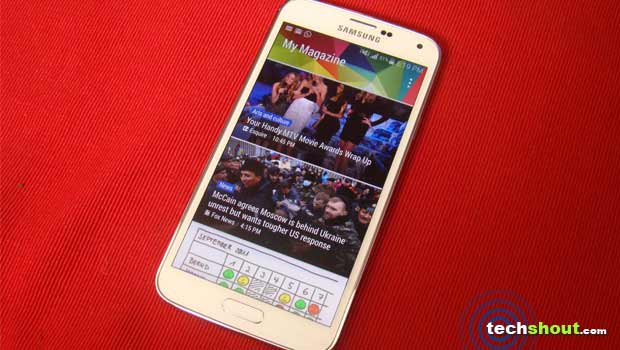 With the Samsung Galaxy S5, the conglomerate has taken a more subtle approach to its TouchWiz UI. The company has cleared out a lot of clutter and features which are cool to show off, but don’t quite fit into users’ daily activities. Nevertheless, you’ll still see a good amount of Samsung-exclusive software and many returning features such as Multi-Window, Smart Stay, Smart Pause and more. Where the new additions are concerned, you’ll be treated to the Magazine UI, Samsung’s S Health app which works well with the heart rate monitor and the Ultra Power Saving mode which we’ve discussed in more detail below.

The heart rate monitor and fingerprint reader work like a charm. The latter is one neat security feature, but it can be quite annoying if you operate the phone with the same hand that has a print registered. The thing is, you’ll need to slide your thumb straight down for it to be recognized, and not sideways. This is a bit of a hassle when holding the phone and you’ll probably need both hands to unlock the screen with the fingerprint sensor. While the new UX does take a huge load off the system, it doesn’t look like the company has done quite enough. 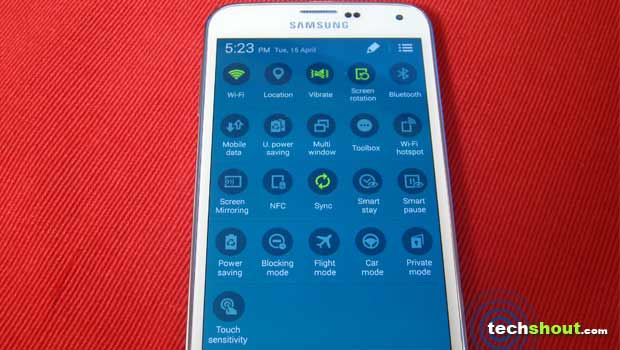 We faced occasional lags and the transitions between screens show a slight delay, or a noticeably long one when you slide over to the Magazine UI. At times, the interface would take a couple of seconds to load up on exiting an application. The handset has the processing power to take on even the most demanding games available. However, we noticed a little lag and spikes in frame rate while testing titles such as Asphalt 8 and Dead Trigger 2. The phone also heats up quite a bit, as is the case with most devices, but not too much for you to be worried about.

The Galaxy S5 is one speedy devil and the small performance issues that we came across can be easily fixed. But where does the phone stand in benchmarks? The device scored big on AnTuTu, achieving 39,481. This is much higher compared to the scores of the Snapdragon 801 variant which falls between the 35K and 37K mark. Quadrant Standard Edition gave the device 24,633, while 3DMark pegged it at 11,583 (the S801 model scored 18,288 here). Lastly, the handset managed to achieve 442.2ms on SunSpider 1.0.2.

Note: We don’t recommend taking these scores into consideration when deciding whether to purchase a phone or not, as they’re synthetic and don’t reflect real-world performance. The above scores are merely for comparison’s sake. 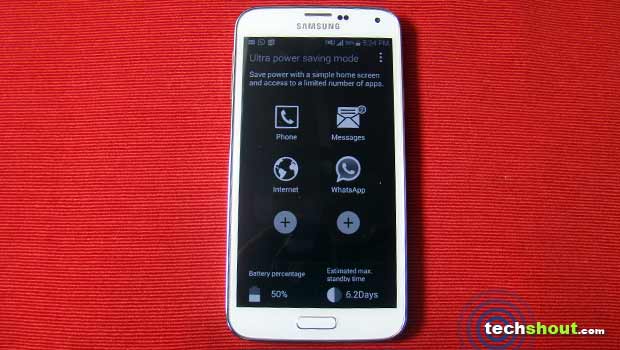 To see how well the Galaxy S5’s 2800mAh battery performs, we put it through our usual tests. The phone’s brightness was set at 50% and Wi-Fi was enabled. We managed to achieve less than 5 hours of heavy gaming. In our video test, the device lasted for a little over 8 hours of HD playback. Apart from the usual Power Saving features, Samsung has also incorporated the Ultra power saving mode. Here, the screen gets converted into grayscale, various apps and services are shut down along with Wi-Fi, Bluetooth and data connectivity, and only a select few applications are able to run. The conversion process takes over 10 seconds to complete and you’ll be able to browse the web, make and receive phone calls as well as operate certain apps, all without consuming too much power.

The AMOLED panel has exceeded our expectations. Visuals are beautiful with good color reproduction and brightness.

The 16MP ISOCELL is a pretty good improvement over the 13MP snapper in the S4. Also 4K video recording is the icing on the cake.

Ultra power saving mode is quite useful when you’re down to almost the last of your battery power.

The fingerprint sensor and heart rate monitor work like a charm.

Samsung really needs to bring in the ‘wow factor’ with its flagships and lackluster designs like the S5’s isn’t going to help.

Even with TouchWiz toned down, there are still a lot of features at the forefront and they take a toll on usability and performance.

The Samsung Galaxy S5 is merely an upgrade to the S4 as Samsung has once again failed to produce a groundbreaking product. Don’t get us wrong, the smartphone is one of the fastest on the market and it has some great features onboard, but it still lacks the ‘wow factor.’ We blame that on the persistent design which we’ve see one too many times. To make matters worse, the handset is quite expensive in certain locations. The Snapdragon version is tagged below $800 in the US, while Indian buyers will have to shell out around Rs 50,990 (approximately $850). We’re giving the flagship a 3.7 out of 5 rating.