It looks like the Samsung Galaxy S5 will receive the same treatment as its predecessor in Korea where potential customers will be offered a beefed up version of the flagship which is currently rumored as the S5 Prime. The smartphone has been spotted at a Hong Kong-based price directory where it’s listed with specs and a price.

The device goes by the model number SM-G906S which is the same as the one spotted at GFXBench last month. What’s more, the specs also match those of the previous leak. The device will have the same 5.1-inch display size as the original, but the resolution has been increased to 1440 x 2560p QHD. The phone is said to run on Android 4.4.3 which is yet to be released and it will be powered by a quad core Snapdragon 805 SOC that’s rumored to be clocked at 2.5GHz. 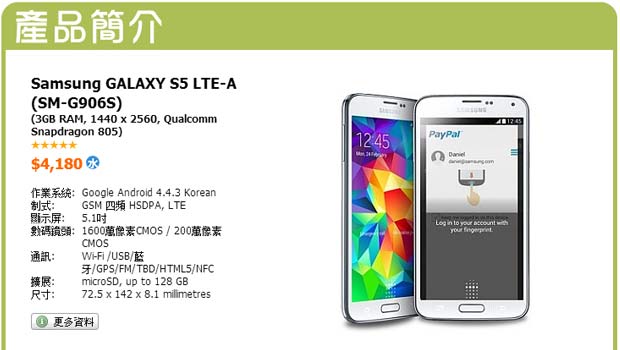 Additionally, the handset will have a 16MP rear camera, a 2MP front snapper, 3GB of RAM, 128GB microSD support and an 8.1mm thick design. An image of the Samsung Galaxy S5 LTE-A SM-G906S has also been embedded, but only shows the front of the device which looks identical to the current flagship, owing to which we can’t tell whether the rear is made of metal or not. The fingerprint sensor will be included as depicted by the above picture.

The Hong Kong-based price directory, which was spotted by Unwired View, notes that the Samsung Galaxy S5 LTE-A SM-G906S will retail for HK$5,070 which amounts to approximately US$654.