Samsung Galaxy S5 mini could go official as the S5 Dx, no heart rate monitor onboard

Samsung will be dropping the traditional branding strategy for a few its devices for something new, take the recently leaked Galaxy S5 Dx for example which is rumored to be the official moniker for the S5 mini. Also, the S5 Zoom went official last week as the K Zoom.

EvLeaks has received an image of the Samsung Galaxy S5 Dx’s product page and while there’s no confirmation of it being the mini version of the company’s flagship on the website, the model number in the address bar (SM-G800A) is the same as what we’ve seen in previous rumors of the S5 mini. Also, the phone looks to be identical to its larger sibling and it’s much smaller than 5 inches. 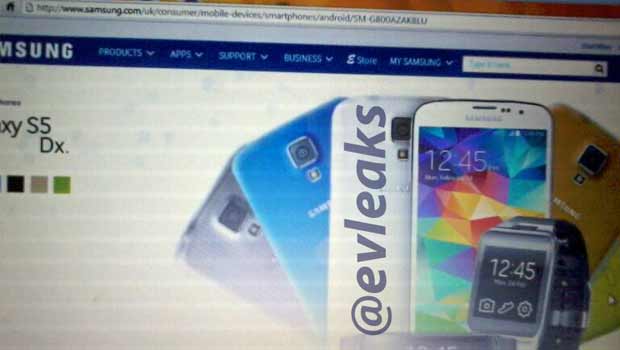 The product page doesn’t provide any concrete information on the handset’s features and specs, but it does showcase the phone in multiple shades, namely white, black, gold, blue and green. Apart from this, there’s no heart rate monitor on the rear panel and we don’t expect to see the fingerprint reader onboard as well. The Samsung Galaxy S5 Dx’s existence was also confirmed by the company as its New Zealand website listed the device in warranty documents, but as the S5 mini. We even know that the phone will be IP67-certified water-resistant.