We’ve been talking about a premium Samsung Galaxy S5 for months and it looks the Crystal Collection edition could just be the device we’re patiently waiting for. The company has put up a teaser video where it shows the flagship smartphone blinged out in Swarovski crystals.

The YouTube video was spotted by Pocket-lint and it was uploaded by the Samsung Mobile Korea account. The video only shows the rear of the Samsung Galaxy S5 which is extensively covered in crystals and it’s likely to be the only panel to get the makeover. No other details have been provided about the smartphone, but we’re likely to see it being marketed as a luxury device with a crazy price tag slapped on. 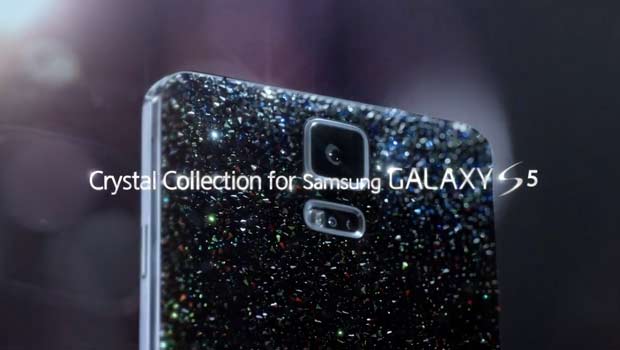 This isn’t the first time the Samsung Galaxy S5 has been given the royal treatment. Earlier this month, we even seen the smartphone make an appearance dressed in gold. The company’s latest flagship is a decent improvement over the previous model. It has plenty of new features, but at the same time, fails to offer an innovative design. We’ve covered all of the pros and cons of the Galaxy S5 in our review.

The YouTube video states that the Samsung Galaxy S5 Crystal Collection will arrive in May and we’re most likely to see it go on sale in Korea first before it reaches the rest of the word (if it ever does).

Here are the specs of the Galaxy S5: