The Samsung Galaxy S5 has been a product of speculation for a couple of months now. Many rumors have surfaced suggesting that the new flagship will arrive with a metal frame and a 2K display. But as you probably known, early leaks aren’t quite reliable as specs and features are likely to change during the testing phase of the device.

What we’ve got for you today comes via the popular Android benchmarking suite, AnTuTu. In the benchmark database, the guys over at AnTuTu have apparently found what is said to be the specifications of the Samsung Galaxy S5 which is rumored to carry the model number SM-G900F. The hardware components fitted within the phone are pretty high-end, making it flagship-class. 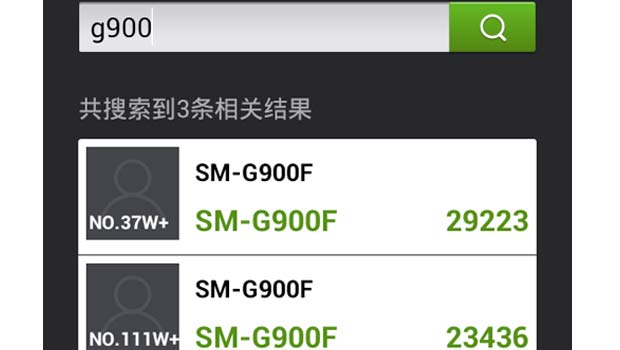 For those wondering about the synthetic test scores, the device achieved 23,436 in one run and 29,223 in another. This denotes that the device is still in testing phase and is being optimized. Based on the details provided by the suite, the Samsung Galaxy S5 will run on Android 4.4 Jelly Bean out of the box. The processor here will be the Snapdragon 800 MSM8904AC clocked at around 2.4GHz with Adreno 330 graphics, making it as powerful as the Note 3.

What’s disappointing is that the screen resolution isn’t listed as 2K, but 1080p. The device will also feature 32GB of built-in storage which is likely to be standard, but Samsung might provide multiple memory options. Then there’s 3GB of RAM and a 16MP camera. 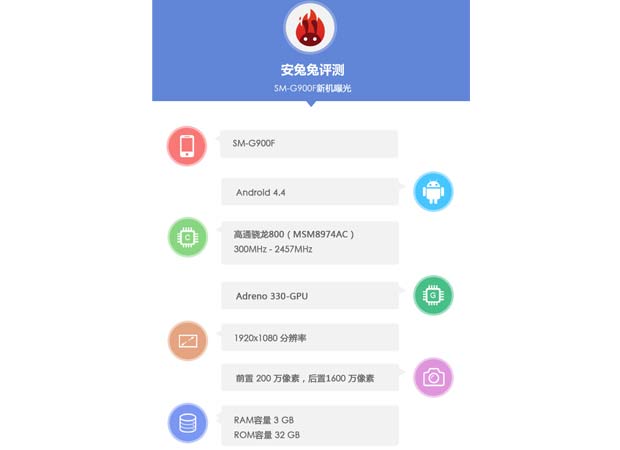 While many OEMs are shifting to 2K displays, Samsung could be reserving that feature for its premium F series phones that are due for launch next year. The conglomerate is also working on ‘Lite’ versions of poplar devices including the Galaxy Grand, Tab 3 and Note 3.