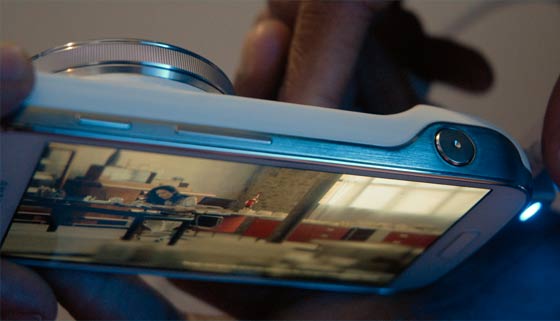 We just witnessed the launch of the Samsung Galaxy S4 Zoom in Mumbai, and were able to go hands-on with this newest device from the seemingly never-ending lineup of Android phones being pushed into the market by the South Korean brand. Samsung has blessed this handset with a 16MP camera sensor and a lens with the capability of surging forward into distances 10 times further than where one’s standing.

The high-capacity sensor brings a lot to the table, but it’s the lens of the camera which forms its main highlight. It grabs hold of a ring mechanism, thus eliminating the need for pinching the screen in order to magnify the subjects. All one needs to do its spin the ring in order to gain the perfect magnification required by them. The 16MP BSI CMOS sensor behaved quite satisfactorily, but we weren’t able to test it thoroughly since we weren’t allowed to take the devices outside.

There’s a xenon flash in the whole offering as well. Coming to the phone‘s software attributes, it can be noted the Samsung Galaxy S4 Zoom kicks in a superb camera interface to say the least. While browsing through this feature, we encountered no difficulties in finding what we were looking for.

The various camera modes that find their way into it include the Smart mode which features a large number of presets that have been adjusted to suit various scenarios. And then there’s the Expert mode which provides you with extreme customizability, by rendering adjustments for aperture openings, shutter speeds, ISO and other traits in the Manual mode and for exposure in its Program mode. There’s even an Auto mode for those who wish to employ the Samsung Galaxy S4 Zoom for hassle-free photography.

Android 4.2.2 Jelly Bean, the latest version of Google’s OS has been infused into the product, and over this software, it grabs a layer of the TouchWiz user interface as well. Most of the interesting features of its parent phone, have been granted to the Samsung Galaxy S4 Zoom, including Group Play, WatchON and more.

A new addition is In-Call Photo Share which lets users click a picture and send it to the person whom they’re talking to without having to disconnect the call. Moreover, Story Album arranges images and videos into a timeline that can be shared with friends and family, whereas HomeSync backs up images and video on the cloud, for users to be able to retrieve them whenever they wish to.

The Galaxy S4 Zoom has been launched in India today, and is expected to hit retail outlets soon tagged with a price of Rs 29,900. Its other significant specifications include, a 4.3-inch qHD Super AMOLED screen, a dual core processor, a 1.9MP front camera, 1.5GB RAM, 8GB internal memory and a microSD card slot for further storage expansions.