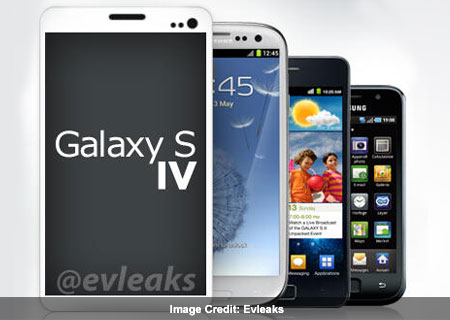 Samsung Galaxy S4 renders have been leaked and big surprise, it is brought to us by the busiest Twitter user in the realm of all things spied, Evleaks. The image above shows the lineage of the S line in a comparison of sorts between the yet-to-be-announced smartphone and its predecessors. Already we have heard so much of the device and a picture of what it might be has started to emerge from the fog of uncertainty.

The latest Galaxy S4 render may come in the form of a leak, but it looks pretty convincing. It brings along with it a few details on the handset such as what platform it will operate on (like that wasn’t already a given), and how it plans to satisfy users’ photography needs. It does nothing to bring a bit of added clarity to the talk of the device having multiple processor options suited to specific markets, like the GS3.

What this leak does peg down though is an almost expected full HD touch screen display of the Super AMOLED type. And in corroboration with previous speculation, embeds 2GB of RAM under the hood to manage processes and chaperone tasks. There should be a 13MP primary camera capable of auto focus and with an LED flash. 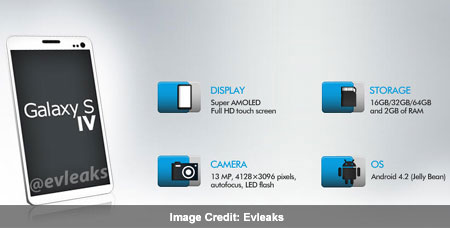 Regarding the internal storage capacity variants in which it is to be made available, the latest unofficial reveal points to the fact that it may come in 3 memory versions – 16GB, 32GB and even 64GB – but there is no word of a microSD card slot for expansion. Android 4.2 (Jelly Bean) will be the OS is use, but what might really be running the show from the South Korean manufacturer’s stable hasn’t received a mention.

Nothing has been revealed about a secondary camera; one that was thought to be the medium for the next generation of software suites, possibly one that brings along the ability to scroll and pause scrolling depending on where a person using the smartphone is looking.

These leaked renders of the Samsung Galaxy S4 can be taken with a little credulity, but they may also be treated with an element of suspicion, as in these images the phone doesn’t have a physical button, something a earlier rumor was so eager to suggest hasn’t been done away with.