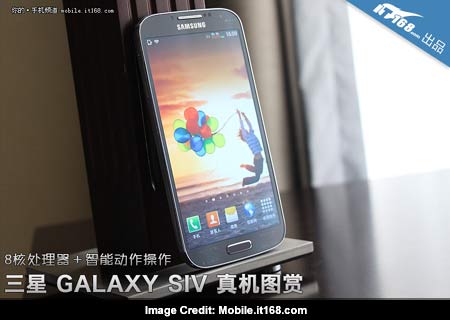 With just hours left for the Samsung Galaxy S4 to go official, a recent leak has disclosed what appear to be images of the handset in question with in-depth clarity. We’re hoping these renders aren’t of any mockup clones or prototypes the company has been working on. But compared to previously revealed images, they do look similar.

Now, unlike most leaks, these aren’t press shots. So their authenticity is still being questioned. The images surfaced on a Chinese blog which goes by the name Mobile.it168.com and were recently picked up by CNET UK. A total of 19 pictures are available on the mentioned website and they show off quite a lot of the handset’s exteriors. For starters, the device looks slightly taller than the S3 that’s because of the large screen of 5 inches that it will carry. 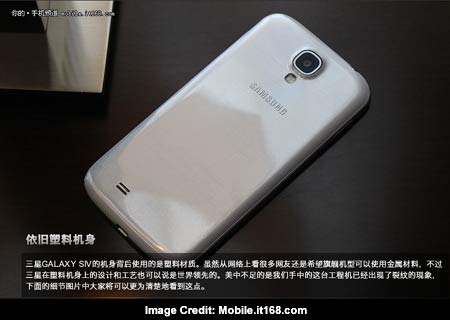 A physical home button will be present on the bottom and the side will possess a slim metal bezel, as depicted in the official teaser photo. Moving to the rear, the panel is designed with a patterned finish that also appears to have a glossy coating. There are dual SIM slots on this leaked version and a microSD card port as well. The Android 4.2 Jelly Bean platform will run the show out of the box and the device should also carry 2GB of RAM as well as a 13MP camera.

If the company continues on with its previous marketing approach, we might see 2 variants of the smartphone. One will be deployed in the US and specific locations that have 4G LTE established, while the other will arrive as a global version. The former should house a Qualcomm Snapdragon 600 processor while the latter will apparently go on with a quad core A15 and a quad core A7 incorporated into a single chipset, the Exynos 5 Octa SOC. However, a previous report suggested that the second module will possesses 4G LTE network support. 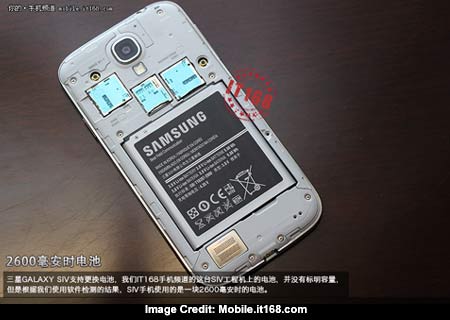 The Samsung Galaxy S4 will be made public today at a Mobile Unpacked even in the US at 19:00 EDT. The company will be providing a livestream of the unveiling through its Tomorrow blog. Another noteworthy tidbit we came across is that the device’s release date is scheduled for the end of April in India.