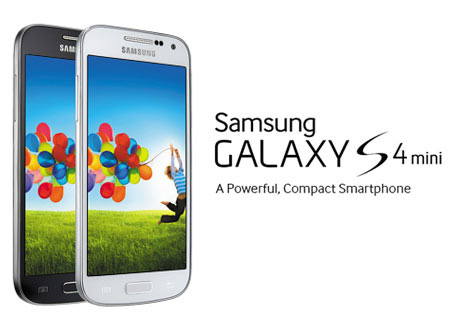 The Samsung Galaxy S4 mini is all set to be seized in the UK through carriers such as Orange and T-Mobile. The smartphone is the compact version of the current Samsung flagship which has been launched in 2 other variants as well, namely the Active and the Zoom which has specifications identical to that of the device in question (primary camera excluded).

Unlike the larger version, the Samsung Galaxy S4 mini comes with mid-range hardware components. Instead of a mighty quad core Cortex A15 processor and a 5-inch 1080p display, the smartphone features a dual core SOC with a clock speed of 1.7GHz and a qHD Super AMOLED panel which measures 4.3 inches wide. Appearance-wise, it maintains the same polycarbonate look of the flagship device, but in a much smaller profile. 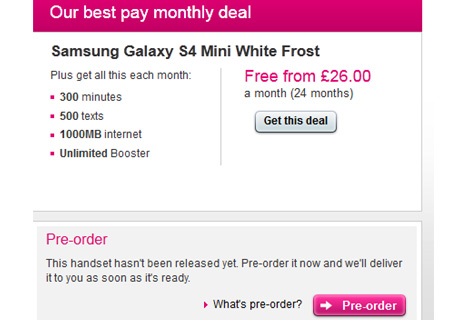 In terms of dimensions, the Samsung Galaxy S4 mini measures 124.6mm x 61.3mm x 8.94mm and it tips the scales at 107 grams which is pretty lightweight for a device of its size. The handset not only has the looks of its larger sibling, but also the rich software attributes it tags along. Android 4.2.2 Jelly Bean runs the show with a tossing of TouchWiz on top. The company’s exclusive UI tags along features such as Group Play, ChatON, Hub, WatchON, S Translator, S Voice, S Travel and KNOX amongst others.

With the rear-facing 8MP snapper, users will be able to capture images and videos through various shooting modes. They include Sound & Shot, Best Photo, HDR, Panorama and Continuous Shot amongst others. Memory is delivered through 1.5GB of RAM, 8GB of internal storage and 64GB microSD card support. Last on the Samsung Galaxy S4 mini specs list is a 1,900mAh battery which can provide up to 12 hours of talktime or 300 hours of standby. 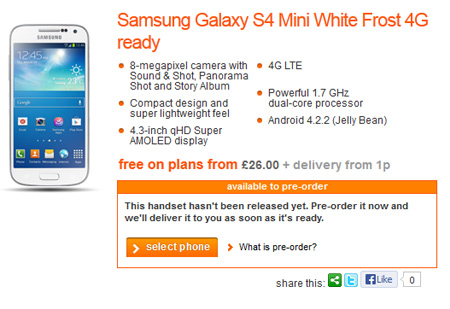 The smartphone is available to pre-order. Both, T-Mobile and Orange are offering it for free on a 24-month contract. Buyers will have to pay a minimum price of £26 each month.