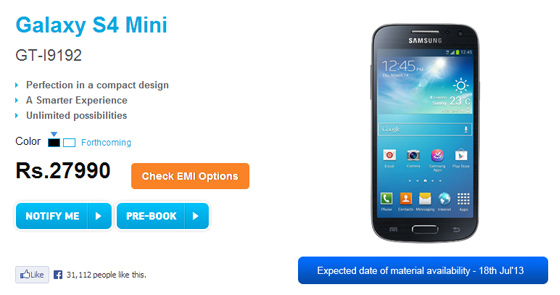 Samsung has disclosed the Galaxy S4 mini release date in India, and this trimmed down version of the South Korean company’s flagship device has finally hit pre-order status on its official eStore and other retailers, with its price placed at Rs 27,990. It will be made available on July 18. This compact Galaxy S4 mini smartphone was launched only a few days ago along with the company’s new 16MP camera-equipped Zoom device. And while we know what the latter’s price is going to be, there’s still no word on when it will be out.

As opposed to its larger Samsung Galaxy S4 cousin’s 5-inch display, the Galaxy S4 mini bears on its front a 4.27-inch Super AMOLED+ panel which showcases its visuals with a qHD resolution of 540 x 960 pixels. Sized at 124.6mm x 61.3mm x 8.94mm, the Samsung phone features a weight of 108 grams. The Android Jelly Bean 4.2.2 OS makes its way inside it, and a number of added traits like S Health, S Translator, S Travel and Group Play have also been infused into it.

Furthermore, the Samsung device kicks in dual SIM card slots as well. As far as its interiors are concerned, a 1.7GHz dual core processor keeps things going for the Galaxy S4 mini, along with 1.5GB worth of RAM. And then there’s 8GB of internal storage memory which is complemented by a microSD card slot with support for up to 64GB of added space. An 8MP rear camera and a 1.9MP front webcam complete its main attributes.

The Samsung Galaxy S4 mini can be pre-ordered now through the Samsung eStore as well as via Flipkart and Infibeam. It will be released sometime around July 18. Meanwhile, we’re still waiting for the Galaxy Zoom launch. Meanwhile, those who like their screens large get always take advantage of the Smart Upgrade offer on the Galaxy Note 2 and Galaxy S4 which is on the tablet right now.