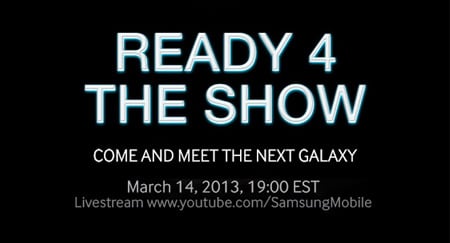 The Samsung Galaxy S4 launch date can well be classified as the one of worst kept secrets in the mobile industry. What was disclosed through a rumor only a few days back has now been confirmed by the South Korean company, disclosing that March 14 is indeed the date the world will get to the witness the device on. While the S3 was showcased to the world through an event held in London last year, the coming of its successor has been scheduled to take place in the Big Apple.

Invitations to the handset unveiling event are being handed out currently through the company’s booth at the MWC in Barcelona. Engadget has managed to grab one of them, and to see what it looks like, readers can scroll to the image we’ve posted below. Meanwhile, Samsung Mobile’s Google+ page also got into the act and put up an invitation to the event’s live stream so as to reach out to the general public. It is set to commence at 19:00 EST on the said date. 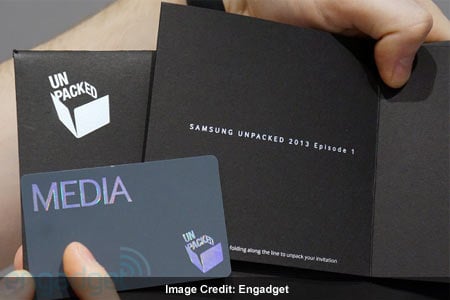 Also, it can be noted that this showcase is being advertised as Episode 1 of the whole deal, thus pointing out that there shall be more such events we can look forward to. We’ll keep the guessing game for some other day. For now, let’s have a quick look at what attributes this device is being rumored to possess. Chances are that we might be staring at a 5-inch Super AMOLED touchscreen display placed on its front surface, letting it garner full HD resolution to counter the flagship devices from Sony and HTC.

It is being said to kick in a 13MP shooter at its back for imaging and video recording purposes. Moreover, a 2MP camera may well be making its way to its front to facilitate video calling. A quad core processor, Android 4.2 OS and 2GB worth of RAM are some of the other predictions that are being made at the moment. A recent leak had also suggested the existence of features called Eye Scroll and Eye Pause.

We’re hoping to get a clear idea about them soon. After all, at March 14, the reveal of the Samsung Galaxy S4 isn’t that far away. Stay tuned to this space for detailed coverage of the event.