And so it begins – Samsung’s 2013 flagship, the Galaxy S4, has started receiving an update to Android KitKat in India. The upgrade is being delivered over the air, but it should also be accessible through the company’s PC software in case you’re out of Wi-Fi connectivity or don’t have enough 3G bandwidth to spare.

The news about the Samsung Galaxy S4 receiving Android 4.4.2 KitKat broke out over at the XDA Developers forums. A few users have also uploaded screenshots of the update where a changelog is visible. Not much information is provided about the new firmware apart from a new launcher setting menu, an improved UI and that users will be able to view album art on the lockscreen during music playback. 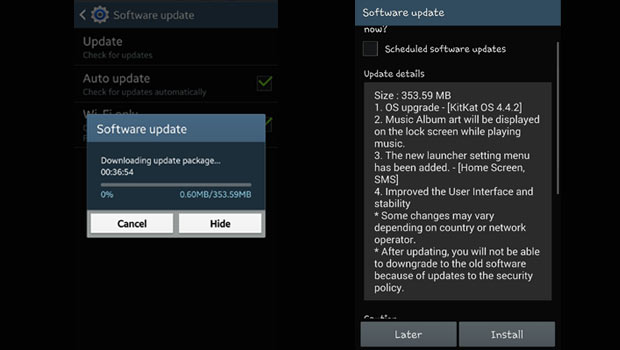 The Samsung Galaxy S4 Android 4.4.2 KitKat OTA update is around 354MB in size which is smaller than what we were expecting. If you still haven’t received a notification of the upgrade on your Galaxy S4, you could manually search for the firmware through the Software Update menu under the About device tab in the Settings menu. For more information of what new features Android 4.4 KitKat brings to the table, be sure to check out this link.

Here’s a quick look the specifications of the international Samsung Galaxy S4:

In other news, it doesn’t look like the international Samsung Galaxy S3 will be getting treated to Android 4.4 KitKat. You can find out more about it here.