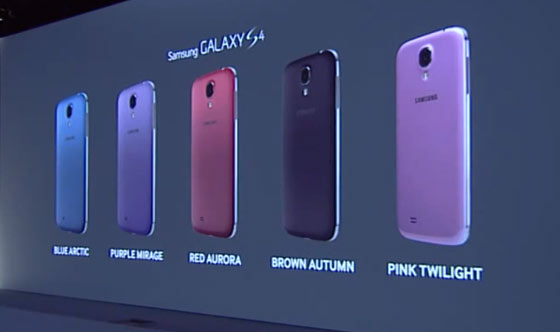 The Samsung Galaxy S4 seems to be the busiest phone around; it’s been constantly getting new versions aimed at expanding its massive reach on the market. After having gotten a rugged version, a lower priced mini edition and a 16MP camera-equipped Zoom variant of sorts, Samsung has gone on to reveal that it will be releasing the phone in five new colors, taking the tally of available hues to seven.

The Samsung Galaxy S4 will now be made available in shades that are called blue arctic, red aurora, purple mirage, brown autumn and pink twilight. While the former four colors were mentioned earlier as well, the latter was revealed only yesterday. These fresh hues will of course be joining the white mist and black frost options that have been available from launch.

Features of the Samsung Galaxy S4 include a large 5-inch full HD Super AMOLED display which possesses pixel density of 441ppi. Depending on the region it’s sold in, it comes equipped with either a 1.9GHz quad core chipset or a 1.6GHz octa core one. This Android 4.2.2 phone also sports a 13MP primary shooter and a 2MP secondary camera.

However, that’s not the case with the Samsung Galaxy S4 Zoom which prides itself on its 16MP sensor that is accompanied by a 10x optical zoom lens. A 4.3-inch touchscreen display finds its way onto it, whereas a dual core 1.5GHz Cortex-A9 processor toils underneath its hood, providing it with the necessary power. Other features remain more or less similar though.

The company also recently unveiled the Active version of this smartphone which is in direct competition with the Xperia Z owing to its water-resistant attributes. Although it bears a 5-inch full HD LCD screen, there are a significant number of differences in its specifications. And then there’s the mini variant of the flagship which carries a 4.3-inch qHD Super AMOLED panel, a dual core processor and other toned down features.

Surely, people wanting to embrace the Galaxy S4 technology now have a plethora of options to choose from, not just in terms of colors but also in terms of attributes.