The Samsung Galaxy S4 smartphone is being treated to a sweet price cut in India where it’s selling at just Rs 17999. So far, Amazon is only offering the device at the reduced retail tag and other e-commerce websites could also be joining the bandwagon soon.

It could be that the South Korean company wants to clear out stock of the Samsung Galaxy S4 considering that a new flagship phone is expected in the next couple of months. Amazon has the deep black option in stock which is different from the normal model. Instead of the brushed metal look on the rear, you get a faux leather finish with a stitched pattern running along the sides. 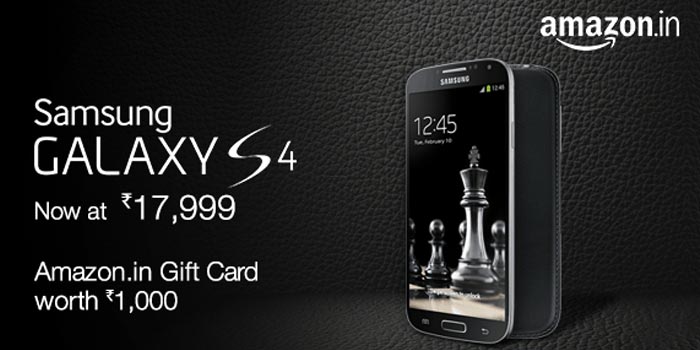 This certainly adds much more style to the handset. Although nearly 2 years old, the Samsung smartphone is still a pretty great option out there and a nice alternative to the Xiaomi Mi 4, the Honor 6 from Huawei and Lenovo’s Vibe X2. The device has already been treated to Android 5.0 Lollipop and it might get updated to the new version 5.1 release in the near future.

Also read: Samsung Galaxy Tab Active is on its way to India, could cost around Rs 52000

What’s more, it has some pretty high-end specs. There’s a 5-inch 1080p Super AMOLED display on the front with a 2MP camera and a 13MP snapper on the rear with zero shutter lag. Coming to the innards, the Galaxy S4 runs on one of the first Exynos 5 Octa processors and packs 2GB of RAM.

Here’s a rounded up look at the Samsung Galaxy S4’s specs:

If you’re interested in purchasing the Samsung Galaxy S4 at Rs 17999, head over to this link.