Certified rugged smartphone Samsung Galaxy S4 Active has traded its 1.9GHz quad core Snapdragon 600 CPU for the latest in the league Snapdragon 800 chipset of equal cores. At least that’s what a new leak has suggested. A flyer posted on South Korean carrier SK-Telecom’s website has gone on to reveal the existence of this new version of the smartphone which also features an upgraded camera.

Russian site Hi-Tech.Mail.Ru has managed to grab an image of the said flyer, granting us a detailed glimpse at the upcoming device. It seems SK-Telecom will be releasing this new Samsung Galaxy S4 Active along with support for its LTE-Advanced waves. When this version will be out is still unknown, as there’s no official information available about it. 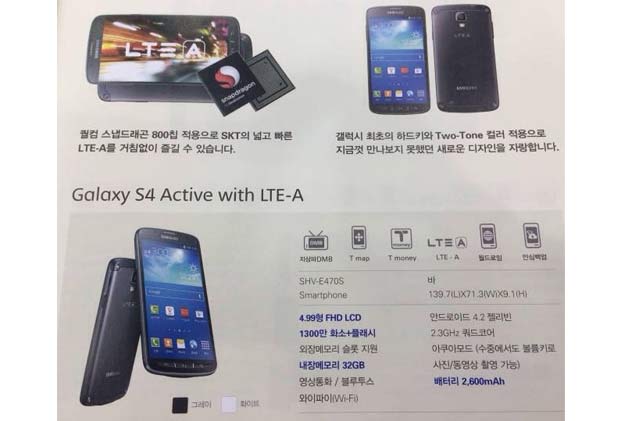 SK-Telecom’s Samsung Galaxy S4 Active will feature a 2.3GHz quad core Snapdragon 800 processor at its heart, but will retain its original 2GB worth of RAM. And while the earlier model offered the benefits of an 8MP camera, this one will kick in a 13MP snapper, just like the Galaxy S4.

The S4 Active is known for its rugged nature which protects it from dust and water damage, and even lets you take pictures and shoot videos underwater. A 5-inch 1080p display has been laid atop this handset, and the SK-Telecom version too will carry the same screen it seems. However, as opposed to the 16GB flash memory offered by its predecessor, this one will grant 32GB worth of storage.

Right now, nothing is known about whether or not the new and improved Samsung Galaxy S4 Active will be making its way into markets from outside South Korea.