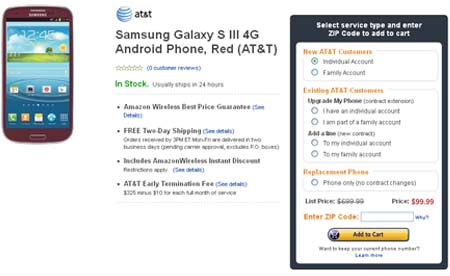 The flagship Android ICS smartphone, the Samsung Galaxy S3 is available for less than $100 through Amazon Wireless. Only the 16GB AT&T, Sprint and Verizon Wireless variants can be purchased for half the price.

Amazon Wireless is allowing users to choose not only a carrier, but also the color. Those opting for Verizon Wireless can go for the pebble blue or marble white shade, while AT&T has its exclusive garnet red hue as well. Sprint loyalists have only one option, that of the pebble blue Galaxy S3. But as Engadget reports, the offer is valid for a limited time only. 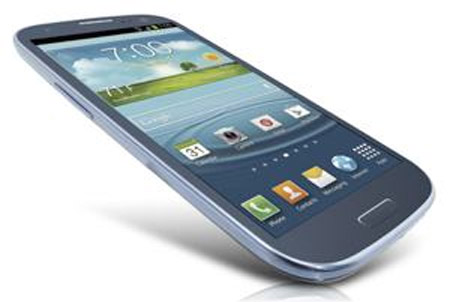 To refresh memories, the smartphone in question flaunts a Super AMOLED capacitive display that offers a multi-touch real estate of 4.8 inches. Besides the touchscreen, the front panel is dominated by a 1.9MP snapper which allows users to engage in video conferencing over the web. An 8MP primary camera, boasting of the ability to capture HD 1080p videos, rests on the rear side.

This 4G LTE-certified handset’s internal working is carried out under the supervision of a 1.5GHz dual core Qualcomm Snapdragon processor and it snacks on Ice Cream Sandwich. Complete with a GPS navigator and Bluetooth, it comes with built-in Wi-Fi for wireless web access. An expansion slot for a microSD card of up to 64GB capacity has also been embedded in the device.

The 16GB Samsung Galaxy S3 price through Amazon Wireless is currently tagged at $99.99. It requires a new two-year agreement and qualifying data plans from one of the aforementioned carriers.