Don’t fancy the blue and white shades on the Samsung Galaxy S3? The company has drenched it in four new colors of sapphire black, amber brown, titanium grey and garnet red. It looks like the AT&T exclusivity over the last mentioned hue was apparently a limited time jig only.

The Samsung Tomorrow Global blog has waxed eloquent on each of the newly introduced hues. Grey is meant to offer the chassis a future-proof look, while the black coating derives inspiration from the stones wielded by ancient Persians and Indians, for protection. The red color reflects the Almandite Garnet gemstone’s influence and brown is meant to highlight the handset’s organic design.

“Every inch of the Samsung Galaxy S3 has been created to reflect the natural elements that inspired its ergonomic design, from the softly shaped curvature to the minimized bezel. By expanding the color range of the Galaxy S3 we are continuing to evolve the Minimal Organic design theme of the handset. The color options we have added evoke the phone’s emotional and natural aspects in a very simple but effective way,” remarked Minhyouk Lee, VP and lead designer of the smartphone.

Since the internals won’t change, we’re not expecting the Samsung Galaxy S3 to carry a different price tag just because of the new colors. But we can certainly hope retailers will give in and cut the price of the device painted in shades that are in comparatively less demand. Take Mobile Fun UK for one – the 16GB white version of the phone is tagged at £10 less than the black and blue options. 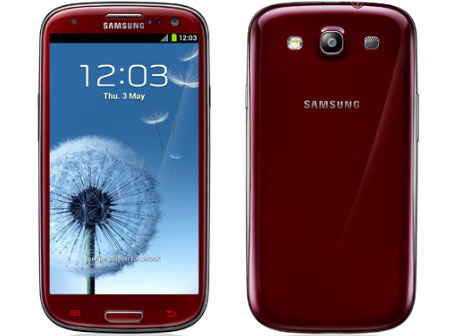 The availability of the Samsung Galaxy S3 in its new colors will depend on the carrier or retailer and region in question. So it’s not necessary that the four aforesaid shades will reach each and every country in which the phone is being vended.