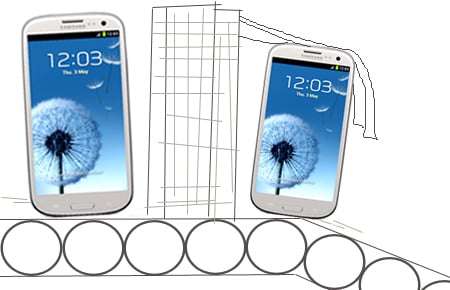 A forthcoming press event in Germany is rumored to be marked for the Samsung Galaxy S3 Mini launch and the revelation of its release date details. Going by the latest story on a smaller version of a popular device (now where have we heard this before?), the South Korean company is being rather mysterious about its upcoming unveiling.

Apparently, invites have been sent out for a Samsung Mobile press conference in Deutschland. It reads ‘So gross kann sein. Und so klein kann gross sein,’ which is said to translate into ‘So big can be small. And so small can be big.’ GSMArena speculates that these words could be hinting at a more modest-sized version of the popular S3 handset.

According to the post, the logo which characterizes the S series is visible in the invite image that was posted by the German website, MobiFlip. Speaking about ‘small’ announcements, Samsung seems to have timed the event to ensure that news from Cupertino will not be the only thing making headlines in the next few weeks. That’s providing speculations turn out to be true and Apple does pull an iPad Mini out of its hat.

Of course, the two rumored gadgets we’re talking about won’t be in direct competition with each other. One’s supposedly a small smartphone, while the other could be a 7-inch tablet. But we can see a lot of potential buyers tossing a coin before coughing up the change if the two devices do hit the market at around the same time.

So will it be a Samsung Galaxy S3 Mini launch on October 11 or some other member in this series?