Samsung’s latest Swarovski bling-embedded Galaxy S3 mini Crystal Edition smartphone which has just been unveiled, is decidedly plain compared to the luxury or ‘girly’ devices we see now and again. In fact, the company’s idea of a decked up rear panel looks uninspired. It’s like something a normal kid (and many of us artistically-challenged folks) would do if given shiny round stickers and directed to decorate the handset in a hurry. 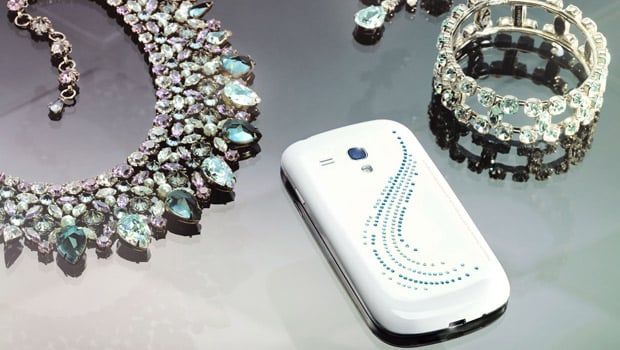 But hey, it’s difficult to walk that line between gaudy and fashionably sparkly when it comes to gadgets. So Samsung’s got an excuse for this one. The embellished back cover is the only exterior design element which sets apart the glittery special edition Galaxy S3 mini from the original.

166 Swarovski crystals in varying shades of light blue are laid into the phone’s rear casing in a sort of wavy pattern. And that’s about as imaginative it gets. We’d pick ‘minimal’ over ‘classy’ as the word to describe it. The rest of the hardware and software details stay the same.

The Crystal Edition smartphone is being sold in Germany for €299. We haven’t heard about the other countries it will be hitting in the future. Meanwhile, isn’t it about time the Galaxy S4 mini La Fleur showed up? Christmas is almost upon us!