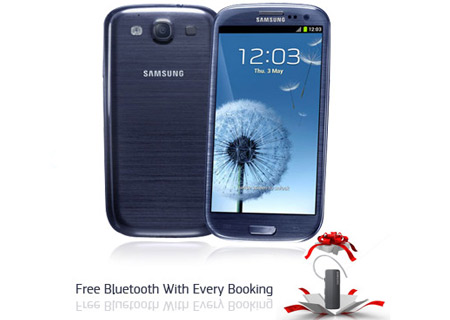 Ever since the Samsung Galaxy S III UK price and release date details got out, it was only a matter of time until it went up for pre-order and Three, Vodafone, O2 as well as T-Mobile are only too happy to oblige. The phone can even be pre-booked through Carphone Warehouse who will be vending it for the said carriers in color options of pebble blue and marble white.

Vodafone has priced the 16GB handset at £149 on a two-year contract and a £26 monthly plan. The last mentioned covers 500 texts, 250MB data and 100 minutes in the UK. There is a whole range of alternate schemes and 12-month or 18-month customer agreements to pick from too. For fans who want to go The Full Monty on T-Mobile, the network operator is offering the 16GB new Galaxy S on a 24-month contract at £49.99 and £36 monthly plans. 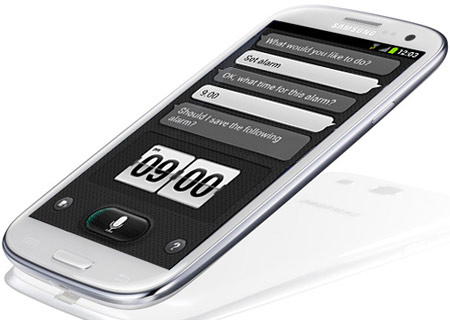 T-Mobile loyalists who’d prefer to pay a higher price for the device and then take the relatively cheaper monthly bill option can drop £300 for the smartphone and £10.50 per month on a 2-year agreement. Three and Orange do not seem ready to take online pre-orders as yet, considering that both carriers are simply asking interested visitors to register for details as of now. At the same time, the former is presently accepting pre-bookings over the phone and in store.

For those who don’t like being tied down by plans, the SIM-free Samsung Galaxy S III price in the UK is marked at £499.95 through Carphone Warehouse.