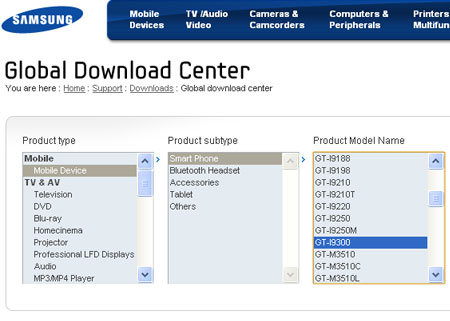 Amongst the various Samsung Galaxy S III rumors circulating around the mobile terrain, the latest hint seems to have captured the interest of quite a few phone enthusiasts. The Korean company has subtly thrown more light on the subject by offering mention of a Samsung GT-i9300 which can be espied on the company’s official page jotted out for the UAE.

As the Samsung Galaxy S II preps itself to receive a scoop of Ice Cream Sandwich or Android 4.0 which is believed to happen sometime soon, it seems like the company is keeping techies busy with slivers of information on the latest star gearing up to shoot across the mobile galaxy. The GT-i9300 appears on the Samsung Global Download Center support website for the United Arab Emirates under the smartphone product subtype when the mobile device category is opted for in the product type section.

As Pocketnow reveals, the Galaxy S and Galaxy S II devices utilized numbers that featured in the i90xx and i91xx ranges, respectively. Furthermore, the Galaxy Nexus and Note individually used the numerical i9250 and i9220 for their products. Now with the i9300 model number glimpsed, a new flagship gadget could be expected which may possibly turn out to be the much awaited Samsung Galaxy S III.

Before we get anyone’s hopes up too high, the latest sighting could be just a mid-range device or even another variant of a current handset and nothing more. Buzz surrounding the successor to the Galaxy S II began last year as tidbits pertaining to its specs and supposed release date trickled out. The highly anticipated smartphone could possess a quad-core 2GHz processor and 1.5GB of RAM along with a 4.6-inch Super AMOLED Plus display and a 12-megapixel primary camera. However, there is no official confirmation regarding these specifications.

The forthcoming Samsung Galaxy S III might just make its appearance at the Mobile World Congress which is scheduled to be held in Barcelona next month. And between the allotted time period from now and the event, the company is expected to throw more clues about its existence at mobile enthusiasts looking to get their hands on a new toy.