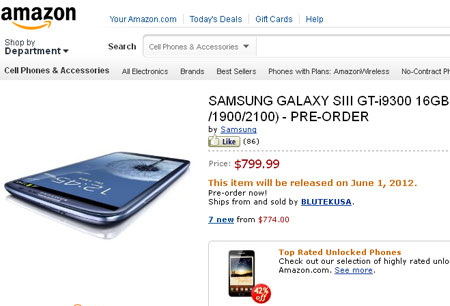 While fans of the Samsung Galaxy S III in the US are still waiting for various network operators to announce the phone, Amazon has decided to put it up for pre-order. And commitment-phobic enthusiasts should like the fact that the device is being offered as an unlocked version.

Amazon is vending the 16GB variant of this 3G HSDPA 850/900/1900/2100 enabled handset in the two shades of pebble blue and marble white. It should come embedding the quad core Exynos 4 Quad processor. The last mentioned spec is expected to change when the device hops onto US carrier shelves.

As far as the word from network operators is concerned, the US is still awaiting details on who will be selling the smartphone, pricing plans and a definite release date. Around the time of launch, Samsung had put up a signup page mentioning AT&T, Verizon, T-Mobile, Sprint, US Cellular, C Spire Wireless and Metro PCS as the carriers, though the drop-down menu listing them was taken off afterwards. 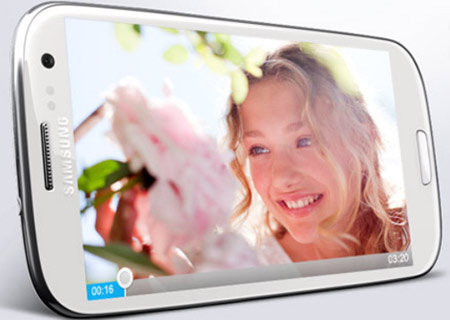 This latest spin on the Galaxy S series is decorated by a 4.8-inch touchscreen display and a 1.9MP camera on the front panel. It uses the TouchWiz UI and lands powered by the Ice Cream Sandwich platform. There’s an 8MP main camera on the rear side and various features such as Face Unlock, S Beam, S Voice as well as Smart Stay are at users’ disposal.

The Samsung Galaxy S III price on Amazon is $799.99. It is already up for pre-booking on the retailer’s website, with June 1 being declared at the date of release.