Samsung Galaxy S Duos 3 is on sale in India, but is not even official yet

Equipped with drab specs, the Samsung Galaxy S Duos 3 has been released in India even before the South Korean giant could officially reveal its existence. This Android 4.4 KitKat handset is priced at Rs 7999, and comes equipped with support for fourteen Indian languages.

The price at which it is selling for, the Galaxy S Duos 3 is not at all competitive by any means. For just Rs 5999, you can lay your hands on the Xiaomi Redmi 1S which features specs that make it a mid-range smartphone rather than a low-end one. And then there are even the Moto E and the Asus ZenFone 4 which are similarly priced and fitted with much better components than the Samsung device. 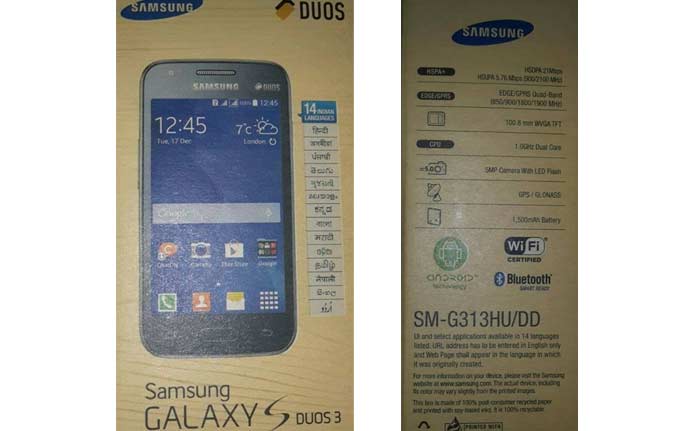 The existence of this dual SIM device has been given away by Manish Khatri from a Mumbai-based retailer name Mahesh Telecom through his reliable Twitter account. It’s of course a 3G supporting handset which runs on a dual core processor and is backed by just 512MB of RAM. The Galaxy S Duos 3 is still to arrive on the doorsteps of online retailers, but it is apparently being sold by the above mentioned retailer even as we speak.

A short glance at the specs of the Samsung Galaxy S Duos 3:

While its MRP has apparently been fixed at Rs 8590, the above mentioned Rs 7999 is actually the best buy price of the Samsung Galaxy S Duos 3.