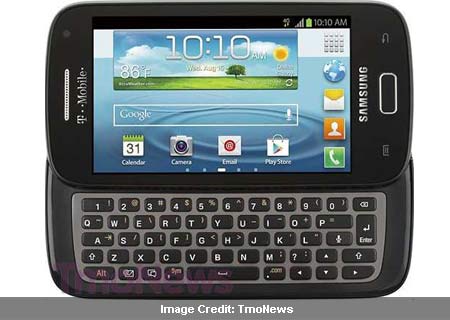 The Samsung Galaxy S Blaze Q T-Mobile smartphone release date is now known thanks to a leaked press shot circulating around the internet. The device in question was already under the spotlight after making its appearance back in July with the SGH-T699 branding.

Well, it seems that the South Korean manufacturer has taken a cue from HTC as the launch details for the handset have been derived through the date and time displayed by the device’s UI. The guys over at TmoNews had managed to get a release date previously and it’s apparently no different from this one which surfaced a few days back.

Currently, there isn’t much known on the specifications front. But putting the bits and pieces together seems to place the handset in the high-end category. A dual core Snapdragon S4 processor clocked at 1.5GHz does all the heavy lifting from under the hood, with the much needed assistance of 1GB RAM.

For quick text input, it comes with a full-sized 5-row QWERTY keypad, while navigation is left in the hands of a 720p HD display of an unknown length and breadth. The extra perks included with the handset are the Android Ice Cream Sandwich platform and HSPA+ connectivity with downlink speeds of up to 42Mbps. If these weren’t enough, it has a similar appearance to that of the Galaxy S3.

The Samsung Galaxy S Blaze Q T-Mobile release date which surfaced through the leaked images suggests that the smartphone will be available on August 15, 2012. Price details are still under wraps.