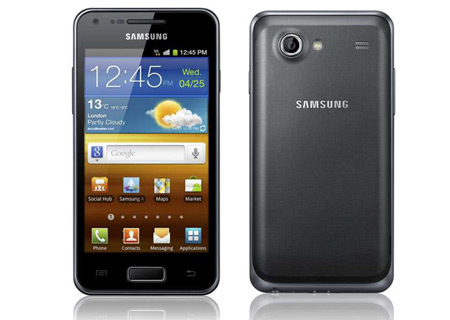 With a sleek and stylish design that’s highly similar to the Galaxy S II’s, the Samsung Galaxy S Advance is headed to the UK as the price and availability details for the smartphone have been officially disclosed. The device will be up for purchase starting from April 30, 2012.

Featuring a Super AMOLED display which spans up to 4 inches wide, the handset wraps in a 1GHz dual core processor that’s accompanied by 768MB of RAM and 8GB of internal hoarding capacity. For higher storage needs, users can throw in a microSD card up to a maximum of 32GB. The device comes running on the Android Gingerbread OS and incorporates the TouchWiz UI.

Simon Stanford, Vice President, UK & IRE Telecommunications & Networks Division, Samsung UK and Ireland, states, “We’ve been pleased with the response we’ve had from customers, partners and media since announcing the Galaxy S Advance in January. As with many of our smartphones before it, the Galaxy S Advance features a screen which uses our Super AMOLED technology so anyone that buys one will experience unparalleled color and vivid clarity when viewing any content on the device.” 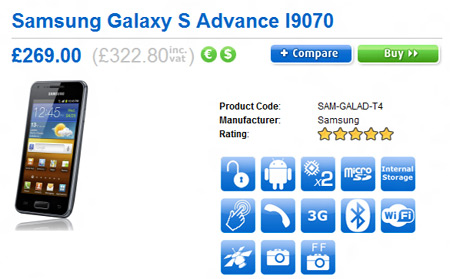 Other components include Wi-Fi, quad-band 3G, Bluetooth, GPS and the Find My Mobile service which allows users to remotely track down the smartphone or wipe off all data if lost or misplaced. The handset weighs approximately 120 grams and packs in all aforementioned components including a 1,500mAh Li-ion battery within dimensions of 123.2mm x 63mm x 9.69mm.

The Samsung Galaxy S Advance price is expected to fall under £329 for the 8GB SIM-free variant, in the UK. Starting April 30, 2012, potential users will be able purchase the device through retailers such as Clove, Expansys and Phones 4u, including network carriers like Vodafone and many more.