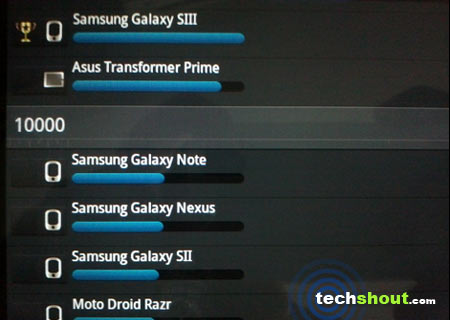 The highly anticipated Samsung Galaxy S3 seems to be on a rumor streak and it’s made yet another appearance. This time around, it looks like someone in possession of the device decided to run the handset through a benchmark, revealing quite a bit about the hardware components the device tags along.

Spotted through the AnTuTU Benchmark application for Android, the smartphone in question ranks even higher than the quad core Tegra 3-powered Asus Transformer Prime tablet. Based on the details listed out by the application, the device incorporates a display (presumably AMOLED) that stretches up to 4.7 inches diagonally. It even possesses a resolution of 1280 x 720 pixels. Running the show here is the Android Ice Cream Sandwich OS that’s backed by a quad core Exynos 4212 processor which operates at a frequency of 1.4GHz. The handset appears to support GSM and WCDMA networks. 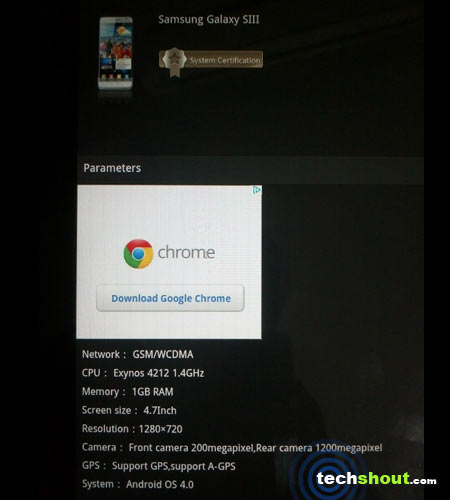 Going back to earlier speculations and rumors roaming about, the next Galaxy phone was touted to come bearing an Exynos CPU, clocked a little lower than what we’re now looking at. Also, the display was previously said to span across approximately 4.65 inches compared to the 4.7 inches derived through the application. Other specifications we’re able to confirm through the leak include A-GPS support as well as a 2MP front-facing snapper for video calling purposes and a 12MP rear-facing camera too.

Just for reminder’s sake, the Samsung Galaxy S3 or the next Galaxy phone unveiling event is scheduled to take place at the Earls Court Exhibition Center in London. It’s just a question of 7 more days until we get all the answers.