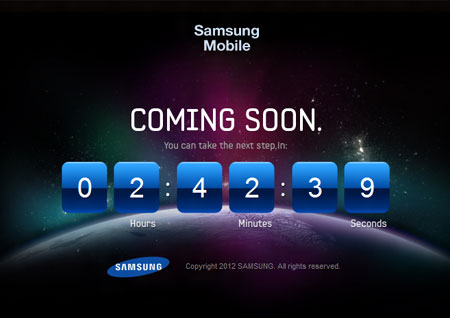 If the rumors on the Samsung Galaxy S 3 weren’t enough, the South Korea-based conglomerate has launched a teaser website that could just reveal more information in the next 3 hours. For reminder’s sake, the next Galaxy phone is expected to make an official appearance on May 3, 2012.

On Sunday, a post on the official Samsung Twitter page read, ‘Destination: tgeltaayehxnx.’ And when deciphered, the term spells out as the ‘the next Galaxy.’ To make things more interesting, the mysterious tweet also indicated the launch of a new website that’s hosted with the same moniker. Besides a ‘Coming soon’ label, the page flaunts a countdown that’s anticipated to reveal more details about the device in question. However, according to Engadget, its source states that the timer is most likely to kick off some sort of an anagram guessing game.

Based on rumors so far, we’ve managed to put together a list of possible specifications. The most anticipated component of the smartphone is its 1.5GHz quad core Exynos SOC which is based on the 32nm ARM Cortex A9 processor. In addition to that, the device is touted to come bearing a WVGA AMOLED display that stretches up to 4.65 inches diagonally. And do we even need to mention the ICS OS or the TouchWiz UI?

As we’ve already stated, the main Samsung Galaxy S 3 launch event is scheduled to go down on May 3, 2012, which is just about 10 days away. So the question here is, could we expect more details to surface after the countdown is over? Or as previously suggested, are we looking at a sort of anagram guessing game? Well, it’ll take a little less than 3 hours to find out.

UPDATE: Hit play on the video we’ve posted above to check out Samsung’s Unpacked 2012 teaser that was released upon the ticker striking zero.