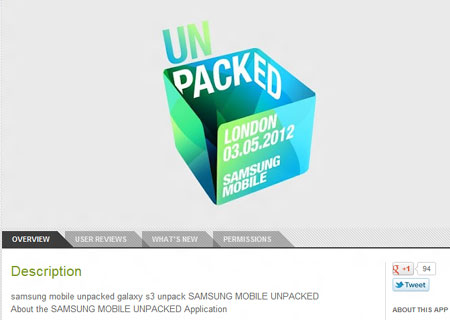 We know that the next Galaxy phone launch is only a few days away, but is it going to be the Samsung Galaxy S 3? Well, the official Unpacked Mobile 2012 application might have just given us somewhat of a confirmation about the device’s proper moniker.

The app in question went live just yesterday. And the guys over at Engadget point out that the South Korea-based conglomerate actually left in the words ‘Galaxy S3,’ right under the description tab. Now before we jump to conclusions saying that the next addition to the Galaxy S lineup could just be real, it’s possible that the manufacturer might have left in the phone’s name for certain reasons. Take keywords and tags for instance.

At present the Galaxy S 3 seems to be the unofficial branding going about the internet. And since the application’s main focus is to deliver all possible information about the launch event that’s scheduled for May 3 in London, Samsung could have left in the name as a way of getting readers’ attention or even Android users to download the app.

The Unpacked Mobile 2012 tool is apparently designed with a motive to provide Android devices access to the latest information on events held by the company. Not only does it comes with all previous launches, but also packs in official press releases on newly unveiled devices. Besides providing sneak peaks, users should be able to obtain schedule details such as date, time and place for events as well as location and transportation information to get there.

So be it the Samsung Galaxy S 3 or whatever else the company wishes to call its upcoming smartphone, rumors and speculations can finally be put to rest on May 3.