[Update: Scroll down for confirmed specs]

Rumors aren’t always 100% correct and when we said there would be a smartphone with a flexible display and a variant of the Note 3 featuring a curved design, little did we know they would land up being one and the same. The end result is the Samsung Galaxy Round, a handset with a curved display that’s scheduled to go on sale in Korea starting tomorrow.

While the device is said to be a variant of the Galaxy Note 3, there’s no sign of the S Pen in the official images. On the specifications front, not much is known about the Galaxy Round. The company has disclosed that it will feature a large 5.7-inch AMOLED touchscreen proffering 1080p FHD visuals. 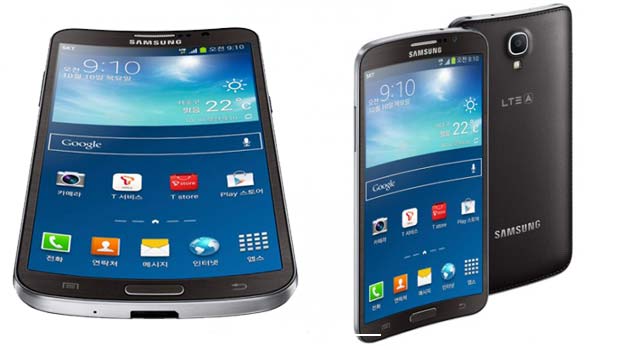 The handset measures 7.9mm thick which is slimmer than the latest Note and it weighs lesser too at 154 grams. Thanks to the official images, we known that the phone will have LTE-A support. Based on this, there’s a high possibility that a Snapdragon 800 SOC could be at the phone’s heart. Additionally, the Exynos 5 Octa could also be a candidate considering that it supports all 20 LTE bands.

According to Samsung, the curved design will provide users with a unique user experience. With Roll Effect, details such as notifications, date, time and battery level can be checked when the screen is of by simply tilting the device. Apart from this, there’s Gravity Effect and the Bounce UX that allows users to control music playback. A short press to the right will skip to the next track, while a tap to the left will play the previous song. Lastly, Multi Window has been incorporated as well.

There’s no confirmation on how much the Galaxy Round will retail for, but we’re sure to get all the information tomorrow when it goes on sale in Korea.