A certain Samsung compact system camera is coming to the UK very soon. Some e-retailers have put up the Samsung Galaxy NX for sale on their websites for £1299. But this is not the official MRP and Samsung is yet to go on record to confirm these availability details about the Galaxy NX.

Jessops and Wex Photographics are the e-retailers who have listed the Samsung Galaxy NX CSC on their websites and while the latter has it for pre-order, the former claims that it already has the gadget in stock for home delivery. However, the snapper continues to be unavailable at Jessops retail channels. This camera was first spotted on the shopping portals by the guys over at ePHOTOzine, reports Pocket-lint. This website also notes that the first Android-based DSLR’s retail value is almost same as that of the Canon EOS 70D. This Canon contender will see the crack of dawn before the end of this year. 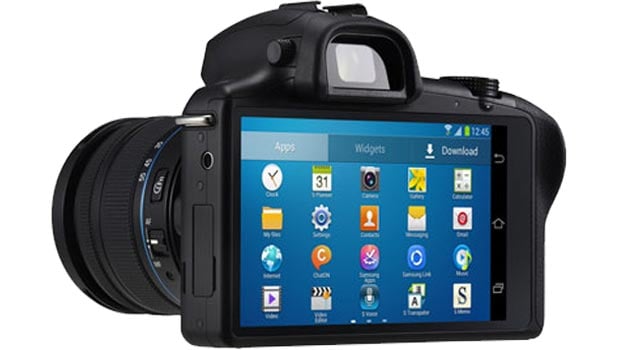 The interchangeable lens camera makes the most of the Android Jelly Bean 4.2 platform and allows photographers to instantly share their images over 4G LTE, 3G or Wi-Fi. A 20.3MP APS-C CMOS sensor is responsible for offering an improved low-light performance and the proprietary DRIMe IV image signal processor is the driving force behind the Samsung Galaxy NX CSC.

The Samsung Galaxy NX even boasts of a 4.8-inch LCD screen that facilitates previewing and composing shots with precision. And if that’s not enough, it is also the proud owner of an SVGA electronic viewfinder. You can expect features and modes like advanced hybrid auto focus, photo suggest, story album, sound and shot, true 3D creator and many more in this gadget. Its maximum shutter speed is said to be 1/6000 second and the shooter is capable of capturing videos at the rate of 8.6 frames per second.

As we already said, the Galaxy NX CSC is yet to received the official nod from Samsung with regards to the information mentioned above.