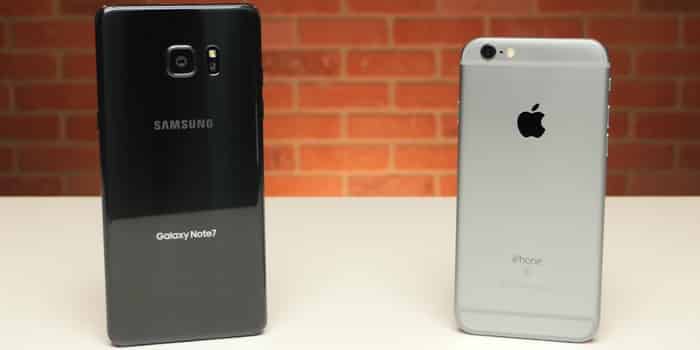 Apple and Samsung fans have been going at it for years, with each camp claiming superiority over the other. A new speed test by YouTube channel PhoneBuff has fired a fresh volley in the war by comparing the brand-new Galaxy Note7 with the year-old iPhone 6S.

On paper, the Galaxy Note7 should be able to best the iPhone 6S with specs like its 4GB of RAM and quad-core Snapdragon 820 processor. On the other hand, the latter features 2GB of RAM and a dual-core A9 SoC. However, having better hardware doesn’t always automatically translate to a better performance.

The new Galaxy Note7 vs iPhone 6S video is a pretty apt demonstration of this circumstance. Both phones are put to the test in two rounds. The first involves opening 14 apps one after the other, while the second repeats the process. The entire procedure evaluates the time it took to launch and load the applications, in addition to measuring memory retention.

As can be seen in the video below, the results are very damning for the Samsung offering. The handset got bogged down in the beginning while starting up Asphalt 8 and was unable to catch up with its Apple rival. In fact, the latter was able to finish both rounds even as the former was still struggling to get done with the first.

In terms of pure numbers, the iPhone 6S completed the first lap in 1 minute and 21 seconds and the second in 1 minute and 51 seconds. The Galaxy Note7 finished in 2 minutes and four seconds initially and 2 minutes and 49 seconds later. It should be noted that there are a lot of factors at play here. For instance, Apple’s iOS-based software-hardware integration is much tighter than Samsung’s Android-based one.

In any case, the video doesn’t conclusively prove that the iPhone 6S is better than the Galaxy Note7. The first is ideal for people who require the fastest performance from their phone and the second for buyers who are more interested in features such as stylus support, a dual-edge screen, and waterproof abilities.