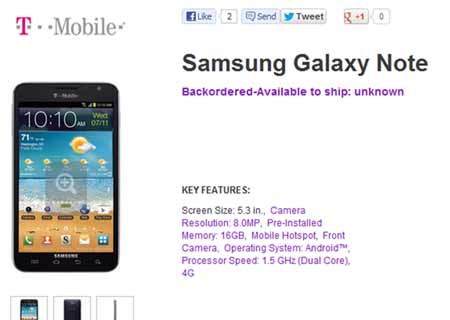 The Samsung Galaxy Note T-Mobile seems to have lived a short life for the carrier in question, with the device being out of stock through the network provider’s website and apparently cancelled. This has raised a few questions which have led to the speculation of a possible Note 2 launch being in the works.

The Note first made its official appearance via T-Mobile back in July, almost a year too late and after a horde of speculations. It was earlier this month that the device actually went up for sale through the carrier. And now, it’s expected to hit EOL (end of life) status on November 1, 2012, something that’s bound to be influenced by how quickly or slowly the remaining inventory is sold out.

A statement from T-Mobile to Android Police, reads, “The Samsung Galaxy Note is currently out of stock online via www.T-Mobile.com; however the device is still available for purchase at select T-Mobile retail stores.”

The Samsung Galaxy Note T-Mobile smartphone is still available for purchase through retail stores and chances of it being back in stock online aren’t high, considering that the carrier has cancelled the handset and removed the product page completely. Well, August 29 is just a few days away and we’ve got our fingers crossed for a Note 2 launch.