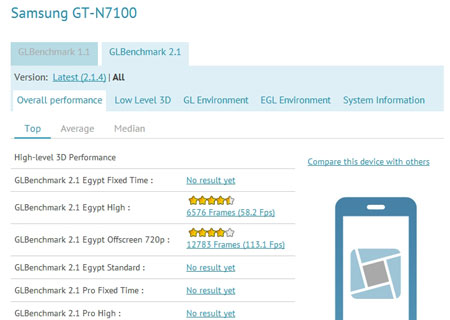 With the Galaxy S3 having made its debut globally after several delays here and there, the South Korea-based conglomerate’s next ‘big thing’ appears to be the Samsung Galaxy Note II. The handset in question is speculated to house a 1.6GHz quad core processor that’s an overclocked version of the one in the former smartphone.

The guys over at Phone Arena seem to have come across a GLBenchmark listing of the device. Based on the information derived through the results, the smartphone-tablet combo is expected to arrive with an Exynos 4412 processor, the very same one incorporated in the S3. Additionally, the Mali-400 graphics accompanying the CPU is apparently ‘on par’ with a few devices that house Qualcomm’s next generation Snapdragon S4 SOC with an Adreno 320 GPU.

It’s most likely that the company is saving the Cortex A15 SOC for next year’s iteration of the Galaxy series. And this seems possible since the S3 has scored well when it comes to performance in benchmarks as well as our first-hand experience of it. Rumor has it that the handset will flaunt a larger screen and a much more compact form factor compared to its predecessor. The display could span just about 5.5 inches wide with a 12MP snapper on the rear. However, the latest report speculates that Samsung is likely to throw in an 8MP camera instead. To put things short, the major bump in specs here appears to be the move from the 4 series to the 5 series Exynos processor.

So when could we possibly see the Samsung Galaxy Note II with its 1.6GHz quad core processor in action? August 30, 2012, at the IFA expo in Berlin is the event many are looking forward to.