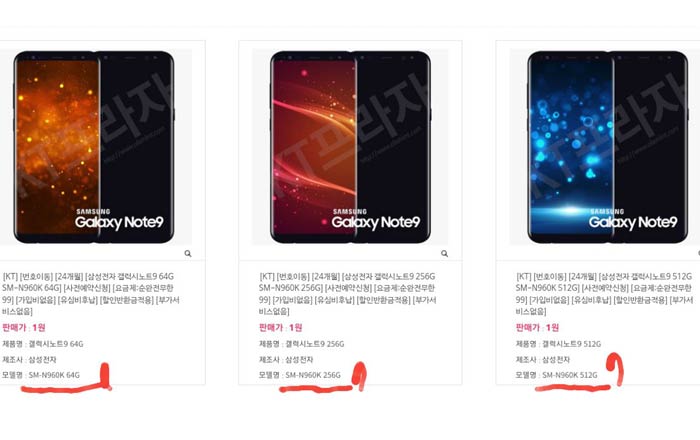 The Galaxy Note 9 has shown up in yet another leak, this time focused on one particular aspect of the phone – its storage capacity. It seems the phone is going to sport 512GB of room inside.

That’s a big upgrade over the current maximum of 256GB. Reports of this happening began coming in last month and there’s now fresh evidence of a new 512GB Galaxy Note 9. Twitter tipster OSCH uploaded a couple of screenshots from a Korean retailer’s store which featured 3 versions of the handset.

One packed 64GB of ROM, the second carried 256GB, and the third had 512GB inside. The listing has since been taken down. Another leaker named Samsung Mobile News later tweeted that the Galaxy Note 9’s 512GB variant would hit select markets like South Korea and China.

Unfortunately, the tipster also claims that Europe won’t be receiving this 512GB model. Samsung has done this in the past as well, releasing its higher-specced storage models in China and South Korea where such phones are in demand and leaving out markets like Europe and the US.

Many expect the 512GB Galaxy Note 9 to get paired with 8GB of RAM. There’ll probably be a Snapdragon 845 processor in the mix, making the device a powerhouse to watch out for. All this power will require a bigger battery to support it.

Rumor has it that Samsung is granting the smartphone a larger 4000mAh battery. Even the wireless charger is apparently getting faster to keep up with the bigger capacity. The brand’s also said to be launching a brand new brown color variant, although the availability of that will once again change from market to market.

The Galaxy Note 9 will probably be out at some point in August if it sticks to tradition. We’ll let you know more about it as and when leaks come pouring in.