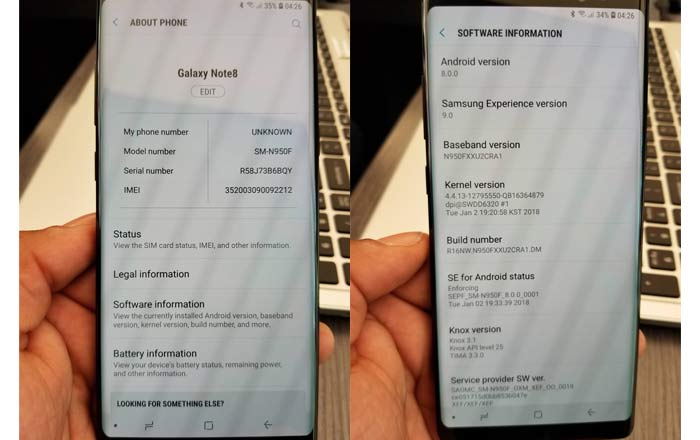 In an unexpected surprise, Samsung appears to have begun seeding the Android 8.0 Oreo update for the Galaxy Note 8. It hasn’t announced the rollout yet, but a Reddit user decided to jump the gun and post photos of their post-Oreo unit.

To recap, Samsung announced an Oreo beta program for the Galaxy S8 and Galaxy S8+ back in November 2017. There isn’t a similar one for the Galaxy Note 8, but the handset seems to have gotten the upgrade first anyway. It’s possible the unit above is part of an early soak test to test the waters before a wider rollout commences.

The Reddit poster claims that he works for Samsung and the Galaxy Note 8 isn’t actually his personal device, but a work phone which customers can interact with. It’s not clear which country he’s residing in, but the screenshots indicate that it’s an Exynos-powered device. This likely means he’s located outside the US.

A separate Redditor detailed a list of changes which he had noticed after switching over to Oreo. This includes autofill API support with biometrics for all apps and the browser, extra edge lighting choices, colored media notifications, Picture-in-Picture support, and an updated keyboard which utilizes Gify for GIF search.

He also mentioned that the secure folder can be told to stay unlocked until the phone falls asleep and there are now customization options for notification badges. You can check if you’ve gotten Android 8.0 by heading to Settings, followed by Software update, and finally Download updates manually.